MAP14: Fortress of Evil is the fourteenth level of Icarus: Alien Vanguard. In this level, the marine must infiltrate a castle on Beta Pictoris 3, where demons reside. It was designed by Robin Patenall, and uses the music track "Hell" by Tom Mustaine. 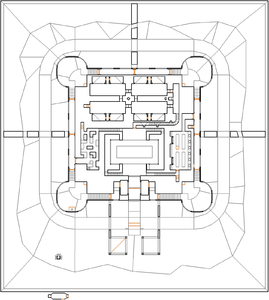 Map of Fortress of Evil
Letters in italics refer to marked spots on the map. Sector numbers in boldface are secrets which count toward the end-of-level tally.

Head around the moat of the fortress until you reach the bridge. Cross it, and you then need to open the front gate of the fortress. To do so, head all the way around to the northern side of the fortress and flip the switch on the wall. Go back around and enter it. You will be trapped in for thirty seconds against some arachnotrons. When the gates open up, go into the main hall, head around the table, and head up the stairs to the right of the door. Grab the yellow skull key on this balcony, then go back downstairs and take the door. Take the steps downward and you will be at a prison block. What you need to do is go to the northwestern block to find the blue skull key. When you do, leave the area, and head back into the main hall. Go up the stairs to the left of the door, then maneuver around the crates until you reach the yellow door. Open it, then open the yellow door to the left. Grab the red key on the balcony, then head back into the main hall. Through the gates outside, a big monster may attack you. It is a spider mastermind on Hey, Not Too Rough or lower, two spider masterminds on Hurt Me Plenty, or a cyberdemon on Ultra Violence or higher. Head up the stairs to the right of the front gate and open the door into a mess hall with imps. Head for the hall to the north and open the blue door. Open the red door to the right, and flip the switch that is next to the blue door on the other side. Now return to the fortress entrance, go outside, and head for the southwest part of the map to find the exit teleporter.

* The vertex count without the effect of node building is 1965.