MAP14: Girls' Night Out is the fourteenth and final map of Midgard Outlaw. It was designed by Mike MacDee (Impie) and uses the music track "". 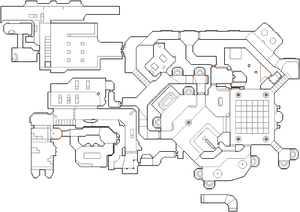 Map of Girls' Night Out
Letters in italics refer to marked spots on the map. Sector, thing, and linedef numbers in boldface are secrets which count toward the end-of-level tally.

After sneaking into the city, Juno locates Drogo's and Dawn's rendezvous point at a local night club owned by one of Drogo's affiliates. With the unwitting Drogo cornered, Juno moves in to take him down at last.

Go up to the roof, grab all the goodies, and go into the night club. Secure the hallways first, because they are well lit and easy to clear out. Do this for the upper and lower floors. You can enter the manager's office and grab the goodies there now, or save them for later: the VIP room is locked.

Clearing the main floor is essential if you don't want to get shot in the back while exploring: in the darkness and chaotic ambiance it's easy to lose track of your enemies. Go to the dance floor and head up the stairs on the right to find the yellow key.

Beyond the yellow door is a truck yard filled with Block Docs, and a valve that lowers the gate in the alley next door. Make your way around to that alley and jump over the wall of crates at the far end: here you will find several Valravens guarding the blue key.

Go back to the Manager's office and open the VIP room. Kill the Archangel for the red key if you want to backtrack to the second floor office outside, which is filled with processors and a Sheriff who guards a medical backpack. Beware that killing the Archangel releases two more of her sisters on the dance floor, who will begin hunting you, and they may get a few cheap shots in from across the night club before you realize they're there.

Defeating all of the Archangels releases a surprisingly well-prepared Drogo in an upgraded version of Dawn's battle armor. This suit isn't as fast and doesn't fire missiles, but makes up for it with its super coilgun: the very trail left by these projectiles can damage you if you get too close, so when Drogo pauses to lock and load, duck for cover fast. When he takes enough damage, the armor falls apart, and Drogo continues the fight with a seeker missile gun. Kill him to complete Midgard Outlaw.