MAP14: Halls of the Damned is the fourteenth level of console versions of Doom, based on the original E2M6: Halls of the Damned with modifications made to adapt to consoles' limitations. The conversion was performed by American McGee, and the original author of the map is Sandy Petersen. The map first appeared in Atari Jaguar version, and was later used in the 3DO, Sega 32X, Game Boy Advance, Sony PlayStation, and Sega Saturn versions. 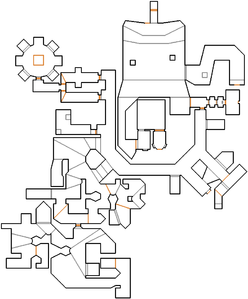 Map of Halls of the Damned
Letters in italics refer to marked spots on the map. Sector, thing, and linedef numbers in boldface are secrets which count toward the end-of-level tally.

You start in a dark room facing another room ahead. Enter the second room where you discover some enemies and a rocket launcher. Open the silver door here behind which is a demon and a cacodemon (this depends on the skill level). There is also a button. Push it and return back to the small room where you start. You reveal a corridor open. Follow it to get to the outside area with two nukage rivers. Go to the other end of this area and push a switch. This will allow you to get a berserk pack. Once you take it, the overall area will flood with nukage and nukage tunnel will open as well (south east). Enter this tunnel and follow it to its end. Flip another button and backtrack through the tunnel. You will notice a wall opened revealing a blue exit door and another door.

The locked blue door actually conceals two other doors that are also locked requiring red and yellow keys consistently. All three keys are scattered in the main parts of the level behind the unlocked door. The order of collecting them is not important, however, the blue key is nearest and can be got nearby behind the door. The yellow key is most far, and is explored deeper.

As soon as you open the small door, destroy all the enemies behind. The blue key can be found in the south east corner of the room, however approaching this corner will open two demon traps (imps can also be present). Instead of going there, better take right turn and left to a switch. This will open the same traps but you can therefore manage the situation by ruse. Shoot the demons via the narrow window. After the cleanup head to the keycard and grab it.

From the eastern portion of the grey corridor, head westward and you will see two passageways into a maze. Go all the way southward until you meet a small door. Open it to reveal a "sub maze" which looks slightly different. Head to the right, around the wall. Go to the west and, when you can, turn left and around. You will see the red keycard. Grab the key and prepare to fight with some hellspawn while going back.

Return to the grey corridor from which you accessed the first maze. Follow this corridor northward until you will come to a dead end with two doors on the left. Both doors conceal rooms with rows of enemies, which lead to one place. Open the third door at the west and you will come to a room with yellow keycard on the central platform. Prepare to fight with hell spawn once you take the card.

PlayStation and Saturn only: if you wish to avoid the final surprise trap with a baron of Hell and demons located near the exit of the level, there is a neat trick (you will not have all 100% kills though). Access the north portion of the main hall (leading to the yellow key) only via the two entrances leading to the red key maze. Doing such a "dodge" you will not activate the walkover line located between these entrances. This only works in PlayStation and Saturn ports, as in playing the other console releases you have already done everything to have the walls shut anyway (see Bugs section).