Unchecked
This level occupies the map slot MAP14. For other maps which occupy this slot, see Category:MAP14.

Map14: Hell Freezes Over is the fourteenth map of Project Einherjar, and the final map of Episode 2, Deep Into White Hell. 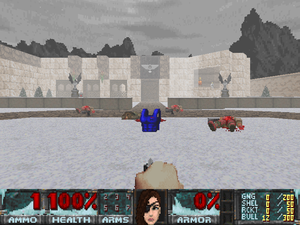 The start point, at the late Warden Veidt's front door.

Juno can enter the mansion from the front door or back door, but either way she's up against an entire army by herself. If she has collected enough Ballistic Knives, she can stealth her way through the first onslaught before grabbing the red key, so long as she avoids the courtyard windows.

The red key is on a pedestal on the second floor, visible from the north side of the house. Once you grab it, a battalion of Block Docs and Ghosts appear in the front yard and courtyard to swarm the house. Smart use of spring mines will neutralize them. Take the red key to the switch by the front door and raise the stairs to the yellow key, which opens the dog-infested garage. Hitting this switch opens the path to the backyard: kill all the Ghosts, then hit the switch, revealing the blue key plinth...but no blue key.

You are then sealed in the yard with a pair of Thors. Kill them both to reopen the door and return to the house in search of the blue key. A familiar voice suddenly startles you...

Now that your ammo supply is all but dwindled, Bloody Zira is waiting for you in the courtyard, initiating a game of cat-and-mouse. Unless you managed your ammunition exceptionally well, you may have to scrounge for supplies while avoiding her gunfire from the windows.

Zira advances aggressively while firing her machine gun. She can shred Juno's health and armor in seconds, so keeping under cover is imperative. Normally Zira is slow, but she is prone to sudden and surprising bursts of speed once she takes a little damage. Her Dessler cannon can one-hit kill you with rockets just as powerful as your own. She drops the blue key when killed.