MAP14: Hive Mother is the fourteenth map of Sunder. It was added by Insane_Gazebo in 2010 and uses the music track "Guardhouse" by James Paddock (Jimmy).

The map is notable for having floors and ceilings created entirely out of hexagonal tessellation (with three very minor exceptions). 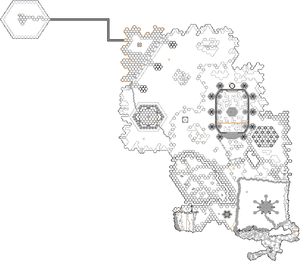 Map of Hive Mother
Letters in italics refer to marked spots on the map. Sector, thing, and linedef numbers in boldface are secrets which count toward the end-of-level tally.

As usual, get the shotgun and super shotgun along with ammo for it. You will have to fight four revenants in close quarters. Get the soul sphere behind them and move on where you will confront three Hell knights, an arch-vile, and three barons of Hell shortly afterwards. A Hell knight and a revenant will teleport behind your starting point at this point. Moving on, the wall ahead of you will lower revealing more revenants and an arch-vile. Imps will be to your left. You have a choice of going left or right. If you go left, you will run into more imps and an arch-vile in the back, and you will notice the wall requires the yellow key. Go right and take out the arch-vile that appears, then backtrack a bit to deal with the five revenants before continuing on. Four barons of Hell are next, and two arch-viles will teleport at the fork, likely resurrecting the revenants that you killed earlier.

When you see the outside area, climb up the hexagons on the left side to the megaarmor and chaingun, then go northwest to the yellow key. Pressing the switch allows you to pick it up, but look out for lost souls who will teleport onto the platform. Hell knights and barons of Hell will appear on the way back as well. Now go back to the yellow key wall and open it to reach an outdoor area at the southwest end. Go collect the rocket launcher and get rid of the nearby arch-vile. The wall further to the left will lower revealing lots of revenants and two cyberdemons. Approaching the switch or the plasma gun behind this wall causes twelve mancubi to teleport near where you entered this area. Be careful while you are out here, as it is impossible to escape if you fall into the hexagonal holes at any time, which contain lava. Make note of where the megaarmor is here as well, the bars here are blocking a teleporter you will go to later.

Use the switch now, and you will unlock the way north. This area will be tricky, as revenants are perched on many platforms high above you. Get rid of as much as you can, they will be nuisances to the enemies that show up later. Your first switch will be in the northeast. Once you use it, Hell knights and barons of Hell will show up. The next switch is a short distance to the northwest of the first switch. After you use it, get out of this hive area to the south, then turn west to find the bars blocking the teleporter are gone. Enter this teleporter for the blue key, then return to the hive area and go all the way northwest to the blue switch, which will open the wall allowing you to continue further.

Marvel at the sights here, and take note that the larger lava pits have teleporters that lead out of them. The exit is located to the north of the large black and red building, but the door is closed. There is a soul sphere to the south if you need it. Make note of the gate just to the right of where you enter this area as well. Your next destination is to the northwest, so take the hexagonal catwalk to the gargoyle switch and use it. Ride the lift up to the honeycomb and prepare for combat. The megasphere and soul sphere in the middle are your only sources of supplies here; there is no ammo in this honeycomb. You will first fight cacodemons, then revenants, then finally two arch-viles, before you can press the central switch allowing you to continue further northwest. Exit the honeycomb going north on another hexagonal catwalk to the next area.

In this hive, approaching the barred-off switch causes the bars to steadily lower. Four cyberdemons will appear behind the switch, while mancubi and chaingunners show up on the west side. The BFG9000 is also behind the switch. Get rid of them while the switch lowers, and when it is all the way down, use it. Make note of the barred-off area to the northwest, but you cannot access it yet. You will then have to backtrack to the open area from before, where you will notice a cyberdemon roaming about. The gate from before has opened, with a plethora of imps teleporting in the area behind it. Five arch-viles will also be present here, along with a cyberdemon far to the east. The large black and red building to the north requires the red key, and there is a soul sphere in front of it and an invulnerability to the east. North of the invulnerability is a small honeycomb section which you will utilize later, and a blocked-off teleporter is north of there. Another soul sphere is to the northeast.

You might want to grab the invulnerability now. Then, head south (do not fall into the hole here, there is no way out) and up the steps to where a cyberdemon is and press the switch. Quickly head back north to the honeycomb section to see arch-viles and revenants showing up. You will then have to press the switch in the middle, which opens up the teleporter to the north. Taking it takes you back to the northwest part of the map. No new enemies will ambush you here, but the barred-off area from earlier is now accessible. Drop down the large shaft and follow the orange hall to the platforms that have the red key. Use the teleporter, then backtrack all the way to the large black and red building and use the key to enter.

In this final area, make note of your surroundings before you go to the middle. There is ammo scattered around along with three soul spheres, one on the left and two on the right, and an invulnerability is in the northwest corner, but it is blocked off by bars. There is an invulnerability right in the middle of the arena, and it is imperative you pick this one up, as arch-viles, barons of Hell, and cyberdemons will enter this place and wreak havoc right away. As they do, two bars will lower, the ones surrounding the second invulnerability, and one on the right side of the north wall. When this particular bar lowers, you will find a tucked-away red button. When you press it, you should get ready for the second wave by picking up the other invulnerability. The second wave features mancubi and arch-viles, the latter of which will likely resurrect the barons of Hell. As you are fighting, the metal bar on the left side of the north wall will lower, eventually revealing another red button, which will allow you to escape. You will now be able to exit at this point.

During the battle between two cyberdemons and twelve mancubi, one of the hexagonal holes contains a sector type 11 damaging floor instead of sector type 16 found in the other holes. Should the player fall in, they will complete the level once their health is below 11%. In addition, if the player is standing on the ledge above but with their midpoint over the damaging floor, their health cannot be reduced below 1%. This oversight is key to all current speedruns of this map.

* The vertex count without the effect of node building is 48438.