MAP14: Implosion is the fourteenth map of Valiant. It was designed by Paul DeBruyne (skillsaw) and uses the music track "Rusty Bridge," composed by Stuart Rynn (stewboy). The par time is 5:30. 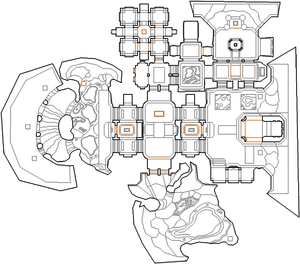 Map of Implosion
Letters in italics refer to marked spots on the map. Sector, thing, and linedef numbers in boldface are secrets which count toward the end-of-level tally.

Take the armor and shotgun shells among the corpses in front of you, then head north up some steps to a room with many barrels - the entrance will close behind you. Take the shotgun and box of shotgun shells at the north end of the room, which will open the side walls and reveal four groups of super imps - kill them by blowing up the barrels, then go through either of the west passages to an outdoor area with more imps and chaingunners. Go through the archway in the south-west corner and head up a staircase guarded by imps and zombies, including some chaingunners standing on pillars visible through the openings on the left side, and when you get to the top run east to leap down to a platform holding the red keycard. Watch out for the wall in front of you lowering to reveal two chaingunners as you approach the key.

Drop down to the shotgun room and kill any imps that teleport in, then follow either of the east passages to another outdoor area overlooked by a mancubus and arachnotron. Go up the steps on the south side and turn left to dispose of the mancubus (plus two more chaingunners on Ultra-Violence (UV) and Nightmare (NM) skill levels), then pull the switch on the north wall to raise a bridge leading to the arachnotron's platform. Cross the bridge and kill any imps and chaingunners that are revealed to your right by blowing up the nearby barrels, then enter their closet to find a lever that will raise a second bridge pointing west. Cross this bridge to reach the yellow keycard, watching out for a lost soul (or cacodemon on Hurt Me Plenty (HMP) or higher) that is revealed to your right.

Return to the shotgun room, where the north wall has opened to reveal more imps, then step past that wall and turn left to see two switches requiring the keys you obtained earlier. Flip both switches to open the doors behind you revealing two mancubi, then go through the doors and turn left to see a lift with some shotgun guys opposite it. Press the lift to activate it and go up to a ledge with imps who are guarding a switch on the south-east column; flip this switch to lower a platform in front of you holding the blue keycard, then drop down to ground level to pick it up (there is also a super chaingun in this room if you have not collected it already). Picking up the key will lower a wall to the west and allow some imps and super demons to come through, along with shotgun guys and imps (plus two pyro knights on HMP or higher) that will teleport to the yellow key area.

Return to the room with the two key switches and open the north door (requiring the blue key) to enter a square chamber containing more imps and shotgun guys. As you enter the south-west or north-east corners the center walls will lower to reveal a couple of suicide bombers - shoot them from a distance to avoid any splash damage. Flip the switch on the west side of the center pillar to open alcoves containing four more bombers and an arch-vile, then pull the lever inside the east alcove to lower the center pillar and reveal the exit teleporter.

A super shotgun can be found in the north-eastern room; taking it will release two pyro knights, along with a revenant on UV and NM.

* The vertex count without the effect of node building is 3426.