MAP14: Jail Break is the fourteenth map of the Newdoom Community Project. It was designed by Andrew Fernie (Ninja_of_DooM). 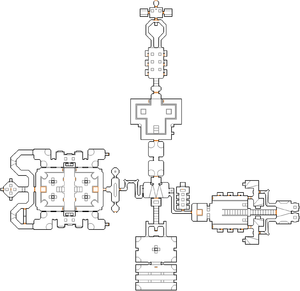 Map of Jail Break
Letters in italics refer to marked spots on the map. Sector, thing, and linedef numbers in boldface are secrets which count toward the end-of-level tally.

Watch out for shotgun guys as you hit the switch to lower the next wall. Go through the next area grabbing the super shotgun and into the halls. Kill the Hell knight and press the switch behind him to raise the stairs then you will enter the hub of the level. Your only option is to go east at this point, so follow the hallway taking the lift down to ground floor. Go down the steps to where there are spectres and a plasma gun. You have to take both paths here; they are symmetrical and have switches at the very end of them. When you press both switches, return to the hub. The yellow key is accessible, so grab it and go through the west hall.

In the room with barons of Hell and imps, you will see the red key is behind some bars to the north. Take the western lift and you will end up in another fairly symmetrical area. Take the lift down and press the four switches here. These switches reveal four more switches on the outer perimeters of this round area, so go back up the lift you went on and press two switches, then take the lift on the other side to press the switches there. These will open several passageways in the north and south halls of this area. Go through the western door where you will be greeted by a revenant and two Hell knights. Now go through both side hallways all the way and press both switches at the end to open the way westward. The switch in the westernmost room triggers two arch-viles on the sides, but it also opens up one of the cells you previously passed. Take the teleporter, and you will be back in the room that overlooks the key. The cell opposite of it has a switch which opens that cell so you can retrieve the key.

Go back to the hub and take the northern red door. Once again a barrier directly in front of you needs to be opened by pressing two switches on the sides, so do that. Keep going north through another prison block, and into the next room, being wary of an arch-vile that appears behind you. If you want supplies, the side rooms have them, otherwise, exit to the north.

Due to Secret #3 being unreachable, only 75% secrets is possible on this map.