MAP14: Labour of Despair is the fourteenth map of THT: Threnody. It was designed by Philip Brown (Liberation) and uses the music track "Hell," originally composed for Icarus: Alien Vanguard by Jeremy Doyle, who also remixed the track for use in this project. 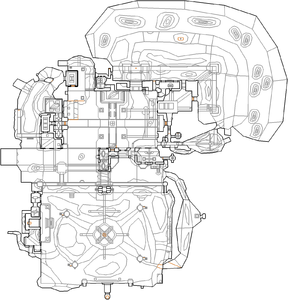 Map of Labour of Despair
Letters in italics refer to marked spots on the map. Sector numbers in boldface are secrets which count toward the end-of-level tally.

* The vertex count without the effect of node building is 6929.

As well as being part of a tribute project to Ty Halderman, the level is dedicated to Liberation's uncle, who, like Halderman, also passed away from a brain tumour.