MAP14: Lift Tension is the fourteenth map of 10 Sectors. It was designed by Jonathan Dowland. 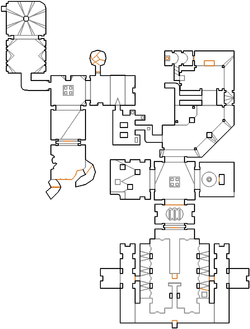 Map of Lift Tension
Letters in italics refer to marked spots on the map. Sector, thing, and linedef numbers in boldface are secrets which count toward the end-of-level tally.

In the exit room, you can exit in a number of ways. The most obvious is the switch, however, you can exit using any of the walls around it for some reason. Also, you can exit the level by going through the flesh wall to the right of the switch.

On Ultra-Violence or higher, there is a red key on the ledge on the west side of its room, as opposed to it being in the center on lower settings. There is another red key visible on the eastern ledge as well, but it is somehow inaccessible, with the same impassable sides as the aforementioned backpack.