MAP14: Loathsome Library is the fourteenth map of Doom 2 Unleashed. It was designed by Captain Toenail and uses the music track "Adrian's Asleep" by Robert Prince.

When using the music WAD included with this megawad, this level instead uses the music track "Watch Out" by Paul Corfiatis. 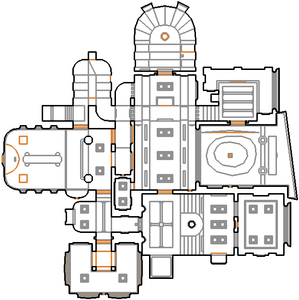 Map of Loathsome Library
Letters in italics refer to marked spots on the map. Sector, thing, and linedef numbers in boldface are secrets which count toward the end-of-level tally.

Take the chaingun and clips if needed then press the satyr switch on the west wall to open the doors, using your new weapon to kill the zombies and imps behind them. Head up the steps (collecting the super shotgun by the red column if required), kill the mancubus waiting to the south then open the north door and kill the demons waiting behind it. Head north through the main hall until you reach an armor pickup, watching out for shotgun guys shooting from between the bookcases, then turn round and head for the south-east corner of the room to find a switch. Flip it to open the bars blocking the east and west doorways, then go through the west doorway and follow the passage past several imps to a door guarded by a revenant.

Backtrack to the main hall and ride the lift up again, then open the north door with yellow skull markings and kill the arch-vile waiting behind it. Enter the room and kill the revenants on your right, then follow the curved staircase up to the red skull key they were protecting. Go back down the lift to the main hall (a mancubus will have appeared here) and head through the east doorway, kill two waiting knights then head through the south door with red skull markings to get outside. Kill any waiting knights and imps, along with five cacodemons that emerge from behind the east wall, then flip the switch on the south wall to lower a pillar holding the blue skull key.

Go back to where you found the yellow key, killing any cacodemons that have appeared in the main hall on the way, and head south through a door with blue skull markings. When you ride the lift behind the door you will find yourself surrounded by barrels and facing two chaingunners - step north-west to escape the trap, then go to the south wall to find a switch next to an armor pickup. Press the switch then return to the large blood pool to find that a bridge has risen - kill the arch-vile on the other side, then cross the bridge and press the computer skull switch to finish the level.

Opposite the red key door is another door; trying to open it will lower the north and east walls to reveal a number of imps and shotgun guys who will be guarding a rocket launcher and ammo.

A candelabra (thing 26) is placed outside the map.