MAP14: Metal Meltdown is the fourteenth map of Hell Revealed II. It was designed by Sam Woodman and uses the music track "Thorny Wall," by Petter Mårtensen (Thyrbse). 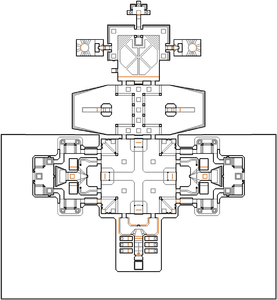 Map of Metal Meltdown
Letters in italics refer to marked spots on the map. Sector numbers in boldface are secrets which count toward the end-of-level tally.

Grab the supplies in the first room and take the lift up. Kill the chaingunners and other monsters here, then drop down and proceed through either passage next to the baron face. A lot of monsters will await you in the next hall, so get rid of them and keep going. The next room has four cyberdemons sitting on high platforms. You cannot attack them yet. What you can do is head through the side passages here. These are full of imps, and have some barons of Hell and a mancubus as well. The southern passage has the yellow door but also the blue key.

After picking up the key, head back to the room with chaingunners, and climb up the right stair set. The blue door is nearby, so take it. Kill the chaingunners, and step into the circle to teleport to a ledge with a soul sphere and the red keycard. Teleport out and you will be back at the yellow door. One of the cyberdemons is now active in the room, so you may have to contend with him. With the red key, go back to the chaingunner room and take the left stair set, where the red door is nearby. Repeat the same process for getting the red key for this side and you will obtain the yellow keycard. When you teleport out, you will appear in the hall connecting the two big rooms. Head back to the cyberdemon room, and face off with another cyberdemon. Return to the yellow door, and take it. Several zombiemen will gib in front of you, after that, take the portal, and your health will deplete but you will leave the map.