MAP14: Mines, also known as the Mines of Degnin, is a level in Strife. It uses the music track "Darker".

Macil has sent the player to shut down the system that turns peasants into acolytes. After visiting the temple of the catacombs, the player can unlock the mines, where his goal is to find Degnin ore. It is needed primarily for destroying the force fields of the factory, where the system is located. As an additional task, the player can destroy a transmitter. It controls the implants of the drones who work in the mines. The task is optional, but the player is rewarded with a stamina and accuracy upgrade if he completes it.

Once the player has found Degnin ore, he can access the factory via two ways. He could return to the Order commons and blow the ore at the gate of the factory. This would have the side effect of setting off alarms in the locale. Alternatively, the player can look for another entrance in the mines and use that to enter and exit the factory. 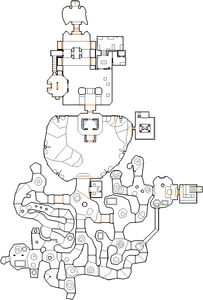 Map of Mines
Letters in italics refer to marked spots on the map. Sector, thing, and linedef numbers in boldface are secrets.

The enemies in this level will not become hostile unless you fire your weapons, but there are a number of reavers that will alert nearby enemies when destroyed. Head through the door in front of you, then go straight forward through the next room to a silver door between two columns. Go through this door and go left around the metal structure in front of you to find a lift with a switch next to it. Throw the switch to open a large gate up ahead, then take the lift down into the pit below. Head forward through the gate you just opened to reach a tunnel with three lifts - take the (south) lift in front of you and ride it down into the mine tunnels.

Watching out for stalkers, go into the right-hand tunnel and follow it round to the right, then head straight forward past a rock column to reach an area with several deposits of degnin ore - pick all of it up. Now backtrack to the large pit and take the lift to the upper floor. Step off the lift and turn right here to see a set of steps leading to a force field. Get close to the field and drop a piece of ore next to it, then step back and destroy the ore with any weapon to remove the field. Go through the door behind the field, then left and climb the steps to find a switch - pull it to expose the transmitter and shoot the screen with any weapon. You will receive a stamina and accuracy upgrade as a reward.

In the second room, there is a small wooden door on the east side which leads to some kind of hospital or living quarters. The room with beds has two medical kits and other pickups. If you continue through to the medical bay and go through the gray door, you will find a storeroom with three med patches, two medical kits and a surgery kit.

After pulling the switch to expose the transmitter, turn around to see another switch which you can pull; this deactivates a force field blocking a door elsewhere in the mines, which allows you to enter the factory's receiving area without returning to the commons. Using this route allows you to avoid destroying the field blocking the factory entrance in the commons, which will cause every enemy there to turn hostile. Return to the tall lift and ride it down into the pit, then go forward to the room with three lifts. Take the (east) lift on your left this time and ride it down to another mine tunnel. Go straight forward into a tunnel which curves to the left, then turn right and lower the lift ahead, which will take you up to an open door. Go through this door and head down the staircase to enter the receiving area.

If all the ore in the level is destroyed before you have opened a route into the factory (either by removing the force field from its front entrance or opening the alternative entrance in the mines), you will be unable to continue the game. The Veteran Edition resolves this potential bug by adding an "ore spawner" thing to the room with the ore, which generates more ore when most of it is taken or destroyed.

* The vertex count without the effect of node building is 2069.