MAP14: Orion's Belt is the fourteenth map of Epic 2. It was designed by Alexander S. (Eternal) and uses the music track "". The par time defined in MAPINFO is 2:30. 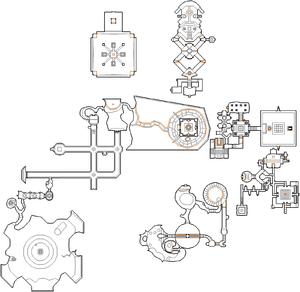 Map of Orion's Belt
Letters in italics refer to marked spots on the map. Sector, thing, and linedef numbers in boldface are secrets which count toward the end-of-level tally.

You need to be extra careful when maneuvering around in this level. For example, near the beginning, just after you shoot the switch past the alien spider webs and go towards a big chasm to the north, make sure you press the switch to the left to call the lift up. If you fail to do this and simply drop down, you will be instantly killed.

Likewise, after this lift are a few areas with some voids in them. Simply falling off anywhere here will instantly kill you.

Finally, in the segment of the map where you will find the yellow key, go to the southwest room. The eye hieroglyph in the northwest corner will reveal a solution to a future puzzle in the map, which involves hitting only the water and fire switches. This puzzle is in the room with the large compass, at the eastern end of the map. After placing the red and yellow skull keys and then using the switch in the small shack to the east where the arch-vile is, the column to the left opens up showing the emblems for the puzzle. Make sure to hit the water and fire switches only. If you hit either of the wave switches, you will instantly die.

These instant death methods occur due to a few inaccessible dummy sectors with barrels and voodoo dolls inside of them. If you mess up, the barrel inside the dummy sector gets crushed, nudging the voodoo doll over a teleport line and telefragging another voodoo doll in a different dummy sector. The first one (involving the chasm and the large lift) is negated if you press the switch to call the lift, which is done by raising a wall between the barrel and the voodoo doll.

* The vertex count without the effect of node building is 4844.