MAP14: Overwhelming Odds is the fourteenth map of Alien Vendetta. It was designed by Brad Spencer and uses the music track "On the Hunt" from Doom. 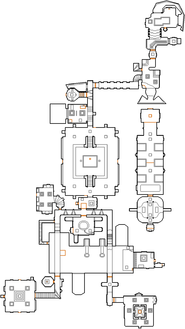 Map of Overwhelming Odds
Letters in italics refer to marked spots on the map. Sector numbers in boldface are secrets which count toward the end-of-level tally.

Overwhelming Odds is the first Alien Vendetta map that requires a bit of planning and care. The level has two halves - the upper half, which is simple, and the bottom half, chock-full of ambushes and tough fights. Both keys in the southern half of the map are guarded by nasty ambushes, which become much easier by carefully instigating monster infighting.

To start off, grab the super shotgun. This surrounds you with several monsters. Break through the hordes and up the steps to the south. Start off with the southern half of the map first. Press the switch here to open the southern door and take the lift down to a corridor with shotgun guys and demons. Before taking the corridors, take the western corridor to a room with imps and spider mastermind. Flip the switch at the end, and return to the lift. Take the door next to the lift to find a room with several radiation suits. Attempting to grab the suits pits several troublesome revenants on you. If you hit the switch in the spider mastermind's room, you will have access to a plasma gun in the middle. Save the suits for later as you do not need them just yet. Take the western hallway across the bridge. You might see a lot of demons in the nukage, ignore them for now and keep heading south. Through the next door, take the first door you see to find a room with a baron of Hell and a BFG9000 which lowers for you. Then, continue down the hallway to the next room.

The BFG is recommended for this area as it contains a ton of monsters. There are two switches here, press the southern one first as the northern triggers the key platform as a lift which eventually rises up. When you pick up the blue keycard, the door closes for thirty seconds and you must fend off monsters in the meantime. When the door opens, go back to the room with radiation suits and take one with you as you fall into the demon-infested nukage pool. To reach the south-east of the map, you must raise a bridge by pressing a switch in the large demon-infested nukage pool, but grab the BFG first, as doing so releases two cyberdemons, then an army of cacodemons - arguably the toughest fight of this map. Then proceed down the bridge to the next hallway. The square-shaped room you come to next has an arch-vile, imps, two arachnotrons, and a teleporter in the middle. Be careful when teleporting into this next area, as it is a corridor of death riddled with many monsters in it. You need to head to the opposite end of this place (pick up the plasma rifle) and open the door. In this room is a cyberdemon and several arch-viles. Make sure to kill them before picking up the red keycard at the end. Revenants will teleport into the room once you grab it, and there will be mancubi in the corridor on the way back.

Go all the way back to the beginning of the level. There may be additional monsters back at your starting point, so dispose of them as necessary, and head into the northern half of the map by pressing the switch to the north. You will find a storage room to the left with some monsters. Press on the wide, gray crate here to lower it revealing a switch. Flip it to lower the crate with the BFG9000 in case you have not obtained one yet. You probably do not need it, but to get 100% kills, it opens up an alcove with an arch-vile. Continue northwards, passing the door on the left and take the door to your right into a very blue corridor. Follow it into the next set of rooms, climbing up the small set of stairs to the room with the switch. Press it and go back down to see a room with an arch-vile and a yellow keycard has been opened. Grab the key and return to the door that you passed, just before the blue corridor. Open this door and open the three key bars to exit. 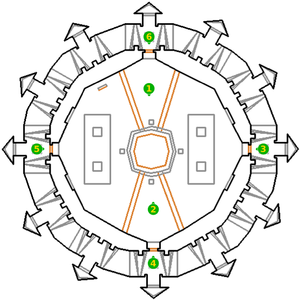 * The vertex count without the effect of node building is 3279.