MAP14: Power Outage is the fourteenth map of Scythe. It was designed by Erik Alm, and uses the music track "Between Levels" from Doom II. 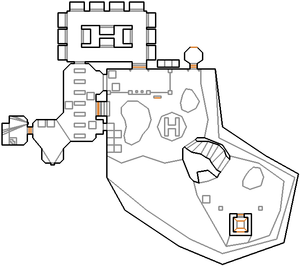 Map of Power Outage
Letters in italics refer to marked spots on the map. Sector numbers in boldface are secrets which count toward the end-of-level tally.

At the start you will see several shotgun guys on crates, as well as a chaingun dead ahead. There is also a switch on the right, but ignore it for now as it will not do anything yet. Take note of the small passage directly behind your start, but ignore it as well, and head into the main building. Inside you will find some monsters and barrels, and the blue keycard is sitting on a perch overlooking another area reminiscent of a room from Doom II's Refueling Base. With the blue key, go back outside and through the passageway to find a small shack where you can open it with the blue key (be careful of the Hell knights, and make sure to grab the rocket launcher too). Inside is an imp and a switch. Pressing the switch will turn the power back on. Now head back into the main building and you will be able to open the door with blue lights around it. Enter and pick up the yellow keycard on the crates, then return outside. If you have not already pressed the switch to lower the bars yet, do so now and they will lower. Behind the yellow door is the same room that is reminiscent of the zombie-filled room from Refueling Base. Find the lone baron of Hell in this room and snatch the key. Return outside and open the exit door to find a revenant, a berserk pack, and the exit.