MAP14: Sanctuary of Horae is the fourteenth map of Skulltiverse. It was designed by Peter Blacha (Shawny) and uses the music track "". 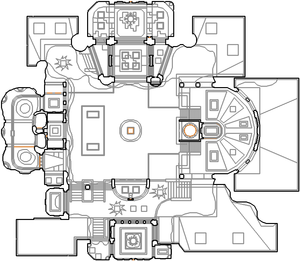 Map of Sanctuary of Horae
Letters in italics refer to marked spots on the map. Sector, thing, and linedef numbers in boldface are secrets which count toward the end-of-level tally.

Ammo is spawning throughout combat events in the designated places.

A room in the western area of the map, south of the cave entrance with berserk and health bonuses, is opened after the second event is triggered.

* The vertex count without the effect of node building is 6652.

The map's idea came to fruition after seeing available textures and some brainstorming/"prototyping". The first concept was a purely snowy map, which became slightly more interesting featuring a "season changing" mechanic later in development. Using conveyor belts and "close-wait-open" door actions for event timing, also used in a similar way in MAP21 and 32, is quite a departure from the mapper's previous work.

The map itself is an arena with time-based wave combat divided into two events that can be done in any order. These events are summer and winter themed with specific sets of monsters and a weapon: