MAP14: Shadow of Evil is the fourteenth map of Community Chest 2. It was designed by Mephisto, and uses the music track "Shards" from Rise of the Triad. 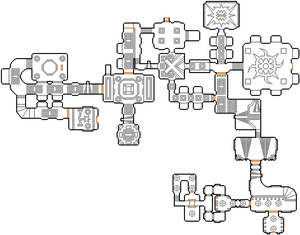 Map of Shadow of Evil
Letters in italics refer to marked spots on the map. Sector, thing, and linedef numbers in boldface are secrets which count toward the end-of-level tally.

In this relatively simple level, start by going forward and then left. Hit the switches in this area, and you will have access to the blue skull key. Go north, and keep going east until you find the room containing the red skull key. Hit the switch and go back a little to a previously-barred passageway to another switch which will lower the red key. From the room with the key, go westward, ignoring the first red door until you reach the room with the armor. Go north here and open the red door for a switch, which lowers the bars blocking access to the rest of the level behind the other red doors. Head through either of those red doors and keep going. When you reach the yellow door, keep following the path west to the yellow key, and then enter the yellow door to exit.

The back, lower side of linedef 833 (the front of the wooden panel pressed on to reach secret #1) is untextured, resulting in a Hall of Mirrors effect when secret #1 is accessed.

* The vertex count without the effect of node building is 2337.