MAP14: Sledge is the fourteenth map of Speed of Doom. It was designed by Darkwave0000 and uses the track The Midnight Carnival from Guilty Gear XX. 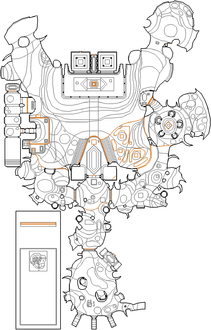 Map of Sledge
Letters in italics refer to marked spots on the map. Sector, thing, and linedef numbers in boldface are secrets which count toward the end-of-level tally.

It is not really a bug, but only one of the soulspheres that lie near the blue or red keycard can be grabbed, so you can not finish the level with 100% items. When you approach one of them, the other one is raised on its pillar.

Counterpoint: the raised soulsphere can still be grabbed via an arch-vile jump.

* The vertex count without the effect of node building is 5047.