MAP14: Steel Works is the fourteenth map of TNT: Evilution. It was designed by Robin Patenall and uses a music track exclusive to this level. 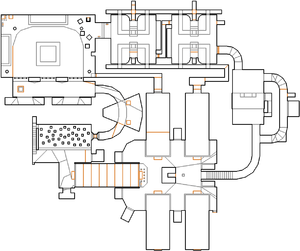 Map of Steel Works
Letters in italics refer to marked spots on the map. Sector, thing, and linedef numbers in boldface are secrets which count toward the end-of-level tally.

You are now in a room with two blood waterfalls and crushers. Prepare for an onslaught of zombiemen, as well as some imps in the recessed tunnels on each side of the room. Head to the back of the room and proceed through the tunnel into another, similar looking room, also populated by more zombiemen. Once again, head to the back of the room and open the yellow door. Do note that this door requires the red key to open from the other side - until you get it, you cannot return to the earlier parts of the level (unless you use a secret area).

Follow the curving hallway to a new room with a blood pool. Take care of the former humans, especially the two chaingunners behind the bars. Turn left into a curved passage and follow the passage to its end, then turn left and descend into the room ahead.

Retrace your steps to the large room with vats of blood, but do be careful as the crusher over the blood vat you ran across has now been activated. Proceed to the west of the room and activate the blue switch to unlock the bars blocking access to the western blood vat. Lower the platform in front of it, ride it up and run across to the other side.

You will end up in another zombiemen-infested room. Turn right, then left, to find a staircase at the back of the room. Proceed to the top, then turn right.

By this time, your radiation suit will have run out, and you are faced with a maze of pillars over a damaging lava floor. Not all the gaps between pillars can be walked through, Lost Souls in the area will block your paths, and every second on that floor will deplete your health. The fastest way to head through the maze is:

Open the switch-door, proceed around the C-shaped hallway and grab the red key. However, grabbing the red key will open two large traps in the room, and unleash arachnotrons (on Hurt me plenty and lower) or a Spiderdemon (on Ultra-Violence and higher) in the starting courtyard. Grab a radiation suit from the western trap and prepare to backtrack.

You must now backtrack through the level, all the way back to the start where the exit teleporter is. Do note that the following traps have opened in the previously visited rooms:

Retrace your steps back to the northwest corner of the courtyard and kill/avoid the arachnotrons/spiderdemon. Activate the switch and step into the exit teleporter to complete the level.

Three of the four shotguns are only accessible in deathmatch mode (or by using the idclip cheat or by using a source port that allows high jumps), but aren't tagged as multiplayer only.

* The vertex count without the effect of node building is 1192.