MAP14: System Control is the fourteenth map of PlayStation Final Doom and is the first level of the TNT episode. It is based on the PC version of System Control which was originally designed by Tom Mustaine. Changes for the PlayStation port were authored by Tim Heydelaar.[1] It uses the music track "Hell's Churn".

The level uses the tech base sky taken from Doom II which is similar to the sky of the original TNT: Evilution. 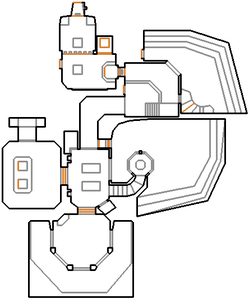 Map of System Control
Letters in italics refer to marked spots on the map. Sector, thing, and linedef numbers in boldface are secrets which count toward the end-of-level tally.

Enter the door in front of you. Kill the three zombiemen in front of you (as well as an imp on Hurt Me Plenty skill level or higher) and go north through the hallway until you arrive at a third room with a raised walkway. Kill the demon, two zombiemen and imp in this room (plus two more imps on HMP or higher), then activate the switch on the west wall to raise some stairs and climb up them. Follow the walkway round and approach the exit door, which will open a section of wall behind you. Go through this doorway to an outdoor area, kill the imps (on HMP or higher) in front of the switch and flip it.

Go back inside and head back down the stairs towards the starting area - in the room immediately after the starting area, you will see that an alcove has opened containing the blue keycard. Take it and kill the chaingunner behind you, or two on HMP or higher, then retrace your steps to the exit door which you can now open. Kill the imp behind the door and flip the switch. The floor will lower to reveal another room. Kill the two shotgun guys in front of you, then flip the switch on the west wall to raise the bars. Kill the two imps and two shotgun guys (replaced by two chaingunners on Ultra Violence skill level) and hit the northern switch to exit the level.

The starting room contains a berserk pickup right near the door. While not required to finish the map, it makes getting through it easier, as you can easily take down the enemies in your path without using up ammo.

In the second room, you may climb up the eastern stairs to find armor, guarded by an imp.

Also in the second room, you can enter the western door, which leads to another room with a trio of zombiemen, plus two imps on HMP or higher. You will also see two computer pillars which have switches on their north sides. The switch on the northern pillar opens an alcove containing a box of shells. On HMP or higher, this alcove will also contain two imps, two stimpacks and a megaarmor. The switch on the southern pillar opens the way to the secret below.

Opening the alcove containing the blue key also opens a second alcove in the same room, which contains one chaingunner on all skill levels and two on HMP or higher. Their alcove also contains two medikits.

When you approach the exit switch, the platforms either side of you which held shotgun guys or chaingunners will lower, allowing you to pick up their weapons for more ammo.

A cyberdemon (Thing 52) in the northeast outdoor area is marked to appear on deathmatch. Because there is no option to enable monsters during this mode, the monster will never spawn.

* The vertex count without the effect of node building is 434.

This level is shown during the second demo rotation demonstrating the PSX mouse usage. The demo ends after the player is killed by one of the chaingunners guarding the keycard.