MAP14: The Crucified Factory is the fourteenth map of 1 Monster. It was designed by Walter Confalonieri (daimon) and later edited by scwiba, and uses a MIDI rendition of the song "Holy Smoke" by Iron Maiden.

Like all maps in the megawad, the map features only one type of monster, in this case the arch-vile. It is set in and around what looks like a small techbase facility inexplicably built of stone and marble. 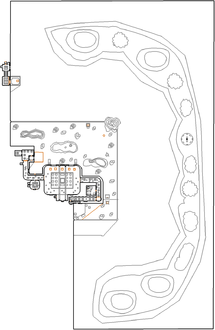 Map of The Crucified Factory
Letters in italics refer to marked spots on the map. Sector, thing, and linedef numbers in boldface are secrets which count toward the end-of-level tally.

Press a switch to the north in order to open the passages to the west and east. Head down the eastern passage and enter the side room. Climb the crates and press the switch. Go back into the passage and ride down the lift. There will be an open door at the end of this corridor, thanks to the switch you pressed. Enter the door, get the red key and jump outside through the hole. Use the teleporter to return to the starting room. Go into the western passage and open the red key door to the side. Grab the blue key, then use it to open the door at the end of the passage. Open the exit door and press the switch to ride down the lift. Go south and press the lion switch, then press another lion switch near the area's south-west corner. Enter the teleporter to the north, open the door and go up the stairs to the exit.

Behind the blue key door is a doorway protected by a laser beam. Inside is a BFG9000 and several energy cells. However, they are impossible to pick up, since crossing the laser beam almost immediately kills the player (and, in cooperative mode, all other players as well).

In the exit room, the images on the walls are Doomworld forums avatars of the authors of the megawad.

A suit of armor in the first outdoor area, which is hidden behind barrels, can be grabbed by straferunning without blowing up the barrels.

* The vertex count without the effect of node building is 5819.

The map was loosely inspired by The Plutonia Experiment MAP11: Hunted, which likewise begins with the player witnessing a gang of arch-viles teleporting away. The name of the map was randomly created with Linguica's Doom Level Name Generator.