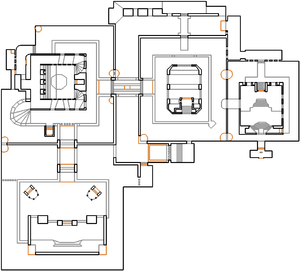 If the player activates the crusher of the rocket launcher room while the wooden door is open, a Hall of mirrors effect can be seen on the wall of the crusher at the doorway because of a missing texture (the upper section of sidedef 1,956, linedef 1,259). It was a situation the designer had not taken into account, as the two windows of the room have the corresponding texture set.