MAP14: The Portal is the fourteenth map of Requiem. It was designed by Eric Sambach, and uses the music track "Devil's Grounds" by Mark Klem.

All you have to do is find the blue key so you can enter the Portal. Now get to work. 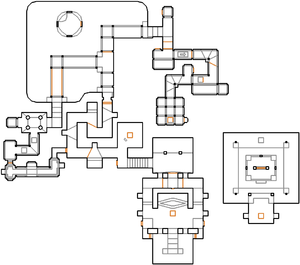 Map of The Portal
Letters in italics refer to marked spots on the map. Sector numbers in boldface are secrets which count toward the end-of-level tally.

Head through the hall grabbing the shotgun and killing the Hell knight and zombies in the next room. Head through the next hallway to find yourself on a walkway in an outdoor area. There are some cacodemons and imps here. To the south is the yellow door, so go north and east, looking out for revenants that appear from the rocky pillar behind you. Head inside the next hall, then go south and then east, towards a dead end. If you look really closely at the ground you might see an arrow pointing at this wall. Press this wall and it will lower. Follow this hallway to the next one and it will open for you. Head through this one to a room with barrels and a few pickups. Grab the health bonus in the middle of the lighted square and you will reveal the yellow skull key. Now backtrack through the halls and you will find your way has been blocked off and there is a room with shotgun guys and/or zombiemen inside. Nearby is a switch which lowers the wall so you can head back out. Now get back to the outdoor walkway and take the yellow door.

Just follow this hallway all the way until you find a teleporter with an exit sign. You can go in it to see a glimpse of the exit portal, but you will not be able to go inside yet. Instead, look to the south in the hallway before the teleporter to find some of the wall tiles are all white instead of gray and green. Press on these to reveal a switch, which reveals a hallway directly behind you. Climb up this hall to an open area with a cage with arachnotrons to the left and a lift to the right. Take this lift killing the zombies to the next area which has arch-viles in cages and some demons (and some barons of Hell on higher difficulties) around the pillar containing the blue skull key. Dispatch the monsters, then head up the building to the south and enter the eastern door to the arch-vile cage which has a switch. Pressing it lowers the key pedestal, so grab it, and now backtrack all the way to the teleporter leading to the exit portal. There will be an arch-vile running around in this area now, and if you have killed the chaingunners in here prior to getting the key, there will be revenants on the four pillars around the portal. Open the portal with the blue key to exit the map.

* The vertex count without the effect of node building is 1074.