MAP14: The Wasted Dens is the fourteenth map of Whispers of Satan. It was designed by Paul Corfiatis, and uses the music track "Dreamtime Cut" by Kristian Aro. 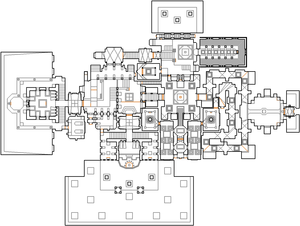 Map of The Wasted Dens
Letters in italics refer to marked spots on the map. Sector, thing, and linedef numbers in boldface are secrets which count toward the end-of-level tally.

Hit the switch at the beginning and look out for enemies who appear behind you. Climb either staircase and head around to find a switch. Hit it and head downstairs and eastward into the next open area. When you move across, look out for enemies behind you, and then climb the stairs here. Follow this path to a switch, when you flip it, you raise a bridge going north. Cross it and flip the next switch you come across to remove some bars at ground level. Go back down and through where the bars were, and into the blood. Head south and open the next door looking out for demons behind you. In this next area, grab the super shotgun and climb both sets of stairs, pressing the switches at each end to get the blue skull key in the middle. After grabbing it, look out for monsters teleporting on the pentagram as well as pain elementals in the blood pool where you were. Head back here and press the switch next to the staircase to activate a nearby lift. Ride it up and you will be next to the switch that lowered the bars before. Head up and to the right here towards the blue door, looking out for mancubi. You will see the yellow skull key in the room behind the blue door. To get it, head downstairs and around to the left, flipping the switch to activate the lift up. At the top of the corridor, hit the switch and go back down. Now go to the room that was barred off to the east and flip the switch there to lower the yellow key. To the south side of this room there is a yellow door, which conceals a switch that removes the bars at the top of the nearby lift. Flip the switch in the blood next to the lift, and ride it up. The red skull key is in this room, along with a few revenants and imps. Go down the stairs to the south and open the door, then flip the switch on the lift with the berserk pack on it and head left. Kill the imps in this green hall and the shotgun guys in the next room, then flip the switch. Now you must repeat this procedure for the left side, which is symmetrical to the one you were on. When you flip the switch in that area, return to the lift and ride it back up, then get the red skull key in the room it is in. Demons and spectres will ambush you by then, so kill them and open the red door. Here, just follow the hall, looking out for enemies that appear in closets around corners. Along the way you will spot an opening with an arch-vile on a platform and the exit door across from that platform. Keep going down the hall until you find a baron of Hell guarding a switch. Make sure to flip this switch, as it raises a bridge to the exit, then go back there. Look out for cacodemons as you head for the exit.

* The vertex count without the effect of node building is 4151.