MAP14: The Wastelands is the fourteenth map of Simplicity. It was designed by Melissa McGee (Agent Spork) and uses the music track "Agony Rhapsody", originally created by L.A. Sieben for TNT: Evilution. The par time defined in MAPINFO is 4:30. 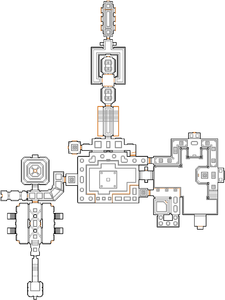 Map of The Wastelands
Letters in italics refer to marked spots on the map. Sector, thing, and linedef numbers in boldface are secrets which count toward the end-of-level tally.

Use the shotgun to kill the imps and shotgun guys in the corridor ahead (there is also a chaingun in the middle of the corridor if you need it), then open the north door to confront a pair of chaingunners and demons. Press the lion switch on the west wall to lower it and reveal a pack of imps, shotgun guys and nightmare demons, then flip a second switch at the back of this room to open a door behind you. Go through this door to enter an octagonal chamber with imps and lost souls, collect the blue keycard at the north end of the room then go back into the hall to find that another nightmare demon has appeared. Open the east door (locked with the blue key) to enter a large room with a walkway surrounding a nukage pit.

Pick off the shotgun guys, Hell knights and imps on the walkway then head round to its north-east corner to find a green door that leads to a second large room. Fight your way past a nightmare demon, imps and normal demons to get to the east side of the room (collecting a rocket launcher on the way) where you will find a switch. The switch will open a compartment behind you with two revenants and a knight, along with a second compartment to the north holding two mancubi; kill these enemies then enter the north compartment to find another switch that will lower the bars blocking the exits. Head back to the previous room then go down to the nukage - a pillar on the center platform has lowered, allowing you to take the red keycard sitting on it. Taking the key will lower the ladder leading out of the pit; you will then have to kill the imps that teleport in to raise the ladder again so you can escape.

Go back to the north-east corner of the walkway and open the silver door here, go round the corner to confront some shotgun guys and imps that have appeared then walk west to a locked door; behind this door is a revenant guarding a super shotgun and a switch that will open another door in the hall behind you. Kill two nightmare demons waiting behind that door then proceed north down some steps to another door, which has two knights and a mancubus waiting behind it guarding another switch; as you approach this switch the floor below you will drop, putting you in a corridor with chaingunners, shotgun guys and more knights. Open the door at the north end of the corridor and kill the spectres and nightmare demons behind it, then head forward to another switch and kill a demon that fades in before flipping it. Flipping the switch will raise the platform that lowered underneath you earlier; go back to that platform, passing two knights that have been released on the way, and press the satyr switches on its sides to lower the lift before walking north to the switch you saw earlier.

Flip the previously-unreachable switch then head back to the red key area, where mancubi have appeared on the ledge in the south-east corner, then run across the three pillars that have risen on the south side of the room to get to this ledge. Open the east door and follow the path past a revenant to find the exit switch.