MAP14: Troglobite is the fourteenth map of Sunlust. It was designed by Zachary Stephens (Ribbiks), and uses the music track "Another World of Beasts" from the game Final Fantasy Anthology.

A troglobite is any cave-dwelling animal species. 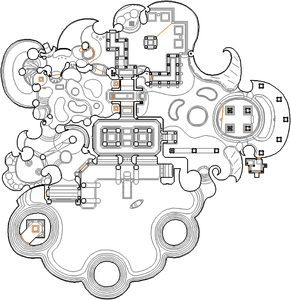 Map of Troglobite
Letters in italics refer to marked spots on the map. Sector numbers in boldface are secrets which count toward the end-of-level tally.

* The vertex count without the effect of node building is 7452.