MAP15: A Crushing Time is the fifteenth map of NJ Doom2. It was designed by Nigel Rowand (Enjay). It is based on E3M6 of NJ Doom. 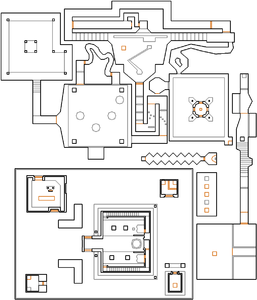 Map of A Crushing Time
Letters in italics refer to marked spots on the map. Sector numbers in boldface are secrets which count toward the end-of-level tally.

Secret exit: After getting the red key (see secret #5 above), teleport back then head through the northern red door in the building to the north-west of the yellow key building. A lift in the centre can be lowered - after it rises, jump across to the eastern ledge, from which it is possible to jump to the secret exit switch. Note that there are no secret levels in this WAD.