MAP15: Alchemy is the fifteenth map of Jenesis. It was designed by James Paddock (Jimmy), who also composed the level's music track, "Voyage." The par time is 2:40. 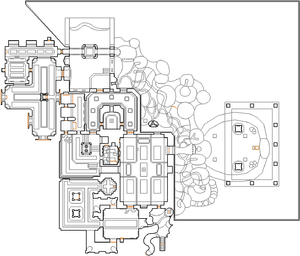 Map of Alchemy
Letters in italics refer to marked spots on the map. Sector numbers in boldface are secrets which count toward the end-of-level tally.

Only 85% secrets is possible on this map due to Secret #7 being impossible to register.

* The vertex count without the effect of node building is 3643.