MAP15: Angry Fish is the fifteenth map of 32 in 24, a deathmatch megawad. It was designed by Tango and uses the music track "Crush Crawfish," originally composed by Kinyuo Yamashita for Mega Man X3.

It was the eighteenth map to be submitted, arriving almost seventeen hours into the session, and according to Tango, it took about 100 minutes to build. 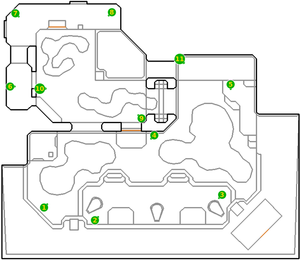 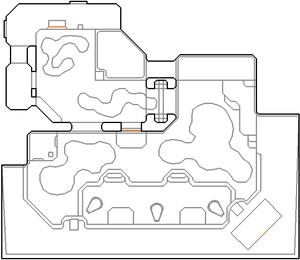 Angry Fish is a very small level reminiscent of early Doom II techbases. While it technically be considered as one single area, part of the outer wall of the main base - so much as it can be called a base - divides the courtyard into an inner segment in the north-west corner, and an outer segment that covers the rest of the map area. The inner segment of the courtyard contains a single lift that allows access to the structure. A rocket launcher is at the top of the lift, and following the walkway around to the south leads to a shotgun, and, at the end of a narrow protrusion from the main walkway, a plasma gun. Travelling east from the lift leads to a new section of the walkway with a green armor. Following the walkway further to the east will take the player to the outer courtyard. A chaingun can be found along here, as well as some steps which serve as an alternative entrance to the walkway without having to enter the inner courtyard at ground level.

The southern wall of the outer courtyard features a shallow pit with another rocket launcher and some rocket boxes. In the western corner of the outer courtyard, a slightly raised platform has another chaingun. A box of bullets can be found further along the partitioning wall, and the metal supports next to it are a lift that lowers to reveal a berserk. The lift can only be lowered from this side.

Other than the groups of health bonuses found across the map, the only source of health is the berserk pack.

This level contains eleven spawn points. All players get a super shotgun on spawn.

* The vertex count without the effect of node building is 580.