MAP15: Blood Bath is the fifteenth map of Scythe. It was designed by Erik Alm, and uses the music track "The Dave D. Taylor Blues" from Doom II. 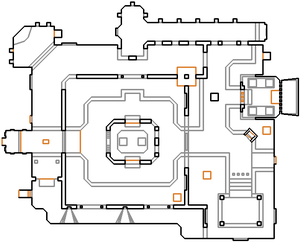 Map of Blood Bath
Letters in italics refer to marked spots on the map. Sector numbers in boldface are secrets which count toward the end-of-level tally.

Normal Exit: This map is somewhat reminiscent of MAP14: The Inmost Dens from Doom II. Go through the brown building you are in and grab the berserk pack at the end, then drop down to the dirt path. Find a lion switch in this area, it should be somewhere on an eastern wall, and it will lower a barrier to the central part of the map. Over here, enter the central stone building to find the red skull key and some revenants. Head back to the red door you passed previously and enter it. You can grab the blue key here, but watch out for cacodemons which appear when you pick it up. Right next to the lion switch is a blue door which reveals a switch removing the blue bars behind you. You can then get the yellow key. Now head all the way west past the central stone building to two doors, one of which requires the yellow key. Open it to reveal two arch-viles and the normal exit.

Secret Exit: There are actually two ways of reaching the secret exit. One way is to first, press the lion switch to access the central part of the map. From there, head towards the western door to lower it. However, do not go through it, instead, stand on where the door is, facing southwest, and when it rises, time a jump and you should land in Secret #2. Use the lift and open the door on the right to access the secret exit. For the second way to reach the exit, you will first need to access the yellow key platform. Head to the very southern edge of this platform without falling into the blood and look to the west. There will be an opening here, and you must run and jump to it. Make a running jump there, trying not to hit the metal beam. When you make it, you can just follow this hall to the secret exit door.