MAP15: Blood Fountain is the fifteenth map of 2048 Unleashed. It was designed by Kristian Aro (Nebula) and uses an untitled music track by Paul Corfiatis.

This level contains a secret exit to MAP31: Vibetech. 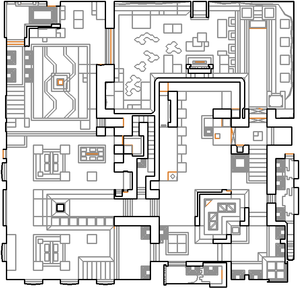 Map of Blood Fountain
Letters in italics refer to marked spots on the map. Sector, thing, and linedef numbers in boldface are secrets which count toward the end-of-level tally.

Take the shotgun in front of you if needed then go through the doorway on your left (with a box of bullets) to find a door with a blue skull pillar next to it - just before you reach this door, enter the opening in the wall on your left to find a shotgun guy and arch-vile guarding a blue switch. Press the switch and go back to the start point then head north through a second doorway (with a box of shotgun shells); just before you reach the staircase ahead, look through an open door on the right - behind it is a berserk pack guarded by a revenant, zombies and one or two Hell knights. Enter the room and press the gargoyle switch in the north wall, then go up the stairs you saw earlier and go through the open door at the top. Two revenants will appear, and one of them will teleport behind you - kill both monsters and take the blue skull key they were guarding.

Go back down the stairs, turning right when you reach the bottom to see a skull switch and a super shotgun - press the switch, then go back to the door with the blue skull pillar to find that it has opened to reveal a baron of Hell and some imps. Go through the door and down some steps to enter an area with two or three arachnotrons (the one nearest the steps is sitting on a megaarmor) then flip the switch in the north-west corner to lower a lift next to it. Ride the lift up and head north-east past a pillar holding the red skull key to a large door guarded by one to three cacodemons, flip the switch next to the door to open it and step through to confront two or three mancubi. Head east between the crates to find a switch which will lower the pillar holding the red key, but will also open a closet behind you containing one or two arch-viles and a megasphere.

Go back through the large door and collect the red key - when you do so, a cyberdemon will teleport in to the south-east corner near the exit door. Kill it then go up the stairs to the west and open the red key door at the top, ready to face a baron and one to three revenants. Press the switch in the north-east corner then go back down the stairs and head through the now-open exit door, kill the arch-vile waiting behind it and flip the switch to finish the level and move on to MAP16: Mob Quad.

Refer to secret #3 below for information on finding the secret exit to MAP31: Vibetech.

When you reach the top of the stairs leading up to the blue key, turn left to see a rocket launcher. Approaching it will open a closet containing one or two knights and ammo.

Near secret #2 is a lift leading up to a supercharge, which you can lower by flipping a switch in the blood south of the lift. The teleporter next to the supercharge will return you to the blue key door.