MAP15: Bulls on Parade is the fifteenth map of Alien Vendetta. It was designed by Madani el Hariri with parts edited by Yashar "GeminI" Garibzadeh, Anthony Soto and Anders Johnsen. It uses the music track of Heretic's E2M3: The River of Fire. The par time defined in the executable is 8:00. 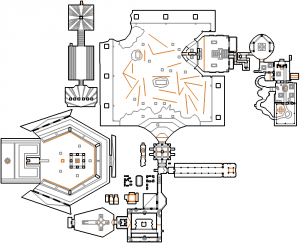 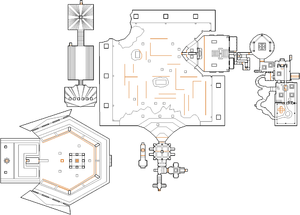 Map of Bulls on Parade (second release)
Letters in italics refer to marked spots on the map. Sector, thing, and linedef numbers in boldface are secrets which count toward the end-of-level tally.

Kill the shotgun guy and cacodemon and head through the door to the south. Follow the rooms until you find a room with a lava river. The nearby switch raises a step that helps you cross into the next room. You will have to grab the blur artifact sitting in the lava river. This particular sector of lava is not damaging, but you will be trapped inside this sector while monsters teleport around you. Look towards the south to see a new switch. You need to shoot it, and a switch right next to you will open. This switch frees you from your encampment. Now there is a new door to go through to the south. Dispose of the monsters in the rooms, then venture through the lava river, making sure to grab the radiation suit as you go. Go all the way down the river, until you find the yellow keycard. Then, backtrack all the way to the beginning to find the yellow exit door. Only this door is not exactly where the exit really is. Just go through the narrow hallway, keeping on your toes for several traps both in front and behind you. You will eventually climb a staircase to another big room. Going west a bit opens two rooms behind you with monsters and closes off the ways to the west. Go to the northern of the two compartments to find a switch to open these up. Now take the lift down into the open field. Rocks will reveal revenants down here, and be careful when fighting them as they have the tendency to teleport all around the field. When they are finished, head south, towards the wall of bodies, and you will be lowered onto a large elevator which descends slowly. Revenants and cacodemons will attack from alcoves as it descends. At the very bottom there is a door and a horned lion switch. Press the switch to lower the next room where the next switch here will open the door in the previous room. Head back there and head through the portal.

You will end up in a large arena with a number of monsters, including parading demons coming from the west. Kill everyone here, as you need to wait for a large demon-faced structure to lower all the way. While waiting, if you approach the pink walls, they will vanish leaving compartments with monsters and items in them. When the big structure finally lowers, Hell knights and barons of Hell will attack you. Find the switch in the center, revealing an arch-vile and a teleporter. Through this teleporter you will see a cyberdemon directly in front of you. He will teleport into the arena, so follow him and you will be back there. You will end up on a platform with a switch nearby. Quickly flip the switch and fend off the cyberdemon. The switch you pressed reveals the normal exit; however if you are headed for the secret exit, read the instructions for Secret #3.