MAP15: City Heat is the fifteenth map of Community Chest 2. It was designed by Stephen "The Ultimate DooMer" Clark, and uses the music track "miditekk.mid" from the game Al Unser Jr. Arcade Racing, composed by Frédéric "Moby" Motte. It is a non-linear level set inside of a large city; the objective is to find nine switches within the buildings that will open the way to the exit. It makes use of various special effects, including multiple bridges, many fake slopes, and waves. 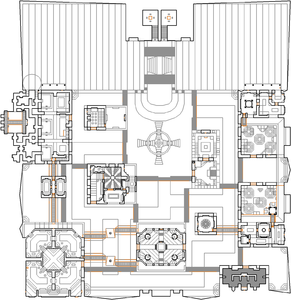 Map of City Heat
Letters in italics refer to marked spots on the map. Sector, thing, and linedef numbers in boldface are secrets which count toward the end-of-level tally.

There are nine buildings that must be entered to finish the level. All of them can be dealt with in any order. The buildings are numbered in red. Each building contains a corresponding switch, numbered in green. As you flip each switch, a green number lights up outside the exit, and one of the doors there opens. Once all nine doors are open, you can reach the exit.

The following walkthroughs take a ground route when possible. Some of the buildings can also be reached by bridges from other buildings, at the player's option.

Once all of the green switches have been triggered, head to the building north of the city. The passage on the left/gray/western half will have opened, revealing the exit teleporter.

Whenever ten minutes pass, a large batch of enemies will teleport into the city. The first batch contains cacodemons, Hell knights, and revenants. The second group consists of the same monsters, along with mancubi and arachnotrons. The final batch is comprised of these same monsters, plus a few cyberdemons (only one on Hey, Not Too Rough or lower) and a spider mastermind.

The fountain can be climbed into, and there is ammunition hidden in the water. Search it to find a box of bullets, a box of shells, a box of rockets, and a bulk cell.

Once all of the blue switches have been triggered, head to the building north of the city. The passage on the right/brown/eastern half will have opened, revealing the teleporter for the secret exit.

With PrBoom, the monsters teleport when they run across the bridges, and they can get stuck here.

As you are required to wait three ten-minute periods for many monsters to warp in, obtaining 100% Kills on this level will take over half an hour.

* The vertex count without the effect of node building is 9176.