MAP15: City of Lost Souls is the fifthteenth map of the Newdoom Community Project. It was designed by Andy Mckie (Mystic). 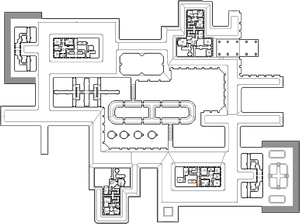 Map of City of Lost Souls
Letters in italics refer to marked spots on the map. Sector numbers in boldface are secrets which count toward the end-of-level tally.

Take the teleporter once you grab the supplies. Now, there are many places to go in this city, and many of them are optional. The monsters in this level will very likely wander around, so be careful about your surroundings. Explore if you want, but if you want to quickly finish, then read this walkthrough.

From the building you emerge in, exit outside and go to the northeast part of the map. There will be a parking garage and a building right next to it. Go northwest of the garage and you will find a super shotgun and a box of shells. There is an alleyway into the building just next to the supplies. In the alleyway, take the southern path up the steps and open the door. Take a U-turn to the left and open the door in front to get the blue key, then leave the building. From this building, head west through the street to the next building where an alleyway runs north and south through the building. There should be a blue-key marked door in this alleyway, open it to find a baron of Hell and the red keycard. Get the card and enter the teleporter. You will end up in the building you started in, inside a room with a megasphere. Jump out the window and head through the nearby alleyway. You will see a scrolling exit sign, and the red-key marked door leads to the exit.

Three partial invisibilities are in inaccessible coop-only compartments, which are similar to the room in which singleplayer players start in (plus a soul sphere on a rooftop in the northwest corner of the map is also inaccessible). Only 82% (on Hey, Not Too Rough or lower) or 96% (on Hurt Me Plenty or higher) items is possible on this map.

1. ^ ndcpmax.zip is a collection of demos for NDCP.

* The vertex count without the effect of node building is 6057.