MAP15: Clash of Galaxies is the fifteenth map of Community Chest 3. It was designed by Eric Baker (The Green Herring), and was the author's second completed and published level. It uses the music track "Liberty Through Violence," composed by Baker specifically for the map; the only other level in the megawad with this distinction is MAP27: Ruby Abyss, by the same author.

The level itself is nonlinear, and is set in a white, cavernous section of Hell, littered with fragments of a UAC base literally torn out by an unknown force. The objective of the level is to find three keycards hidden throughout the level, return to the start of the level, and use the keycards to open barriers blocking access to an exit portal. The title of the level refers to the level's mixed hell / techbase theme.

This level contains a secret exit leading to MAP31: Disarming the Mechanism. 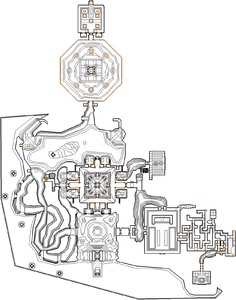 Map of Clash of Galaxies
Letters in italics refer to marked spots on the map. Sector, thing, and linedef numbers in boldface are secrets which count toward the end-of-level tally.

You need all three key cards to exit the map, but they can be obtained in any order.

To the north of the starting area is a "central base". There is a central room, with a hallway running all the way around it, forming a square shape. Each side of that square has a nook in the middle of the outside edge, with a door leading elsewhere. On either side of each nook are doors leading to small computer rooms (eight rooms total). This layout is a landmark to multiple points below.

At the southwest of the map is a pair of grey-walled tunnels, one high, one low. A set of red/green switches near the start lowers a short section, allowing you to reach both. Follow either to the end (jumping down if you took the high tunnel), and you will find a green touchplate on the floor. Step on it, and in the pillar on the island in the lava, a button will reveal itself. Shoot the button with an impact weapon, and a teleporter will momentarily open to your west. That will be warp you across the lava, to the platform at the northwest. Step on the touchplate there, and a different button will appear on another side of the pillar. Shoot it, and the wall to your northeast will lower to reveal a path. Head down the path, then around the corner and over the lava flow, to the north.

Enter the next chamber, and continue around circular walkway, to either side. Open the door at the north, go through, climb the stairs. Go around the balcony to either side, to the end, where ammo boxes sit. Each time you reach the end of a side, a door will open nearby to reveal a switch. Activate both switches to open the door at the top of the stairs, revealing a touchplate.

You will be teleported to the island in the center of the circular walkway you traversed earlier. Approach the metal structure in the center, and zombiemen will begin to teleport in with you as the barriers in the structure lower. Once the barriers finish doing so, grab the red keycard inside, and leave the island via the teleporter at the south. Make your way back to the touchplate platform at the northwest of the lava pool; teleporters will have permanently opened between the two platforms.

Enter the central base. In each of the computer rooms off the east and west halls, there are holes blasted in one of the monitors, leading to a button. Shoot all four of these buttons with an impact weapon, and doors will open into the central room of the central base. The drop down inside is too steep for you to get back out right away.

Grab the yellow keycard. The doors will close, and portals will open on the front of each corner pillar, letting imps into the room. Each pillar also has a skull switch at the rear; both portal and switch are usable as player teleports, bringing you to the opposite side of the room. After nine seconds, the doors will re-open, and steps will raise, allowing you to escape.

From the starting area, head due east, through two doors, around a barrier wall, and through a third door, into a room with lots of computer panels. At the north is a dais with a touchplate. Step on the touchplate, and computer panels at the south will briefly lower to show a button. Shoot this button to open the eastern door. The door leads into a maze. The maze is made up of short sections. Each section has a red button which opens the door into the next section. Individually, they're fairly easy to navigate, but the complete sequence is:

Once you have all three keycards, return to the start of the level. Activate all three switches at the south. Open the southern door and heavy weapon dudes will teleport in front of you. Carve your way through them into the portal.

In the starting area, there is a chaingun just in front of the tri-color gate to the exit, and a berserk pack at the southeast. Other than weapons dropped by monsters, these are the only weapon pickups available in the regular course of the map.

In the maze leading to the blue key, there are ten hidden compartments. The door to each compartment is marked with a pair of identical panels, one above the other, with each panel featuring a horizontal section with yellow/black hazard stripes. All but one of these compartments will open with a simple use press. Inside each of those nine you will find a weapon, ammo, or several armor bonuses. Their locations, relative to the regular (not hidden) segment of the maze to the blue key, are:

The door to the tenth hidden compartment is located at the northeast of segment #5, near map coordinates (3550, -80). It requires all three card keys to open. Once you have them, open it to find a short tunnel to a window, looking onto a demon scurrying around in a blood pool. Press the nearby button to allow the demon to use the teleporter nearby. Once it does so, it will warp through every hidden compartment in the maze, teleport to where you found the blue keycard, and open the red skull door at the end of the maze. (If you missed a hidden compartment, you can go back and open it now, and the demon will continue.)

Head through the now-open red skull door, through the tunnel to the elevator, and take it down. In the next room, a teleportation machine will ready itself, showing a screenshot of the start of MAP31 on the monitor behind it. Step into the teleporter for the secret exit.

* The vertex count without the effect of node building is 8663.

The secret exit exploits a bug in the Doom engine, retained in all source ports, that allows monsters to open locked doors, if the other side of the door is not locked, the monster is fast enough, and the door is thin enough. In no monsters mode, entering the circuitry tunnel where the demon can normally be seen instead yields a red skull key. This is to allow the player to reach the secret exit even without the demon around.

This level was started on July 10, 2007. At that point, Samuel Villarreal (Kaiser) held the MAP15 slot with a level called Spasmolytic, but had not been heard from regarding his level for a long period of time. On the day the level was started, Baker posted to say he could "bang up" a MAP15 if nobody else wanted to do it, or Villarreal could not work on it for any reason. After five days of silence on the subject, Baker took the slot. A beta of the level was submitted to playtesters on August 26, 2007. On September 3, 2007, the level was submitted to Andy Leaver, alongside MAP27.

The theme of the level and its title was decided on from the beginning. The central base was deliberately textured in the specific Knee-Deep in the Dead techbase style.

The yellow keycard room was originally an indoor area, with a circular walkway surrounded by silver railings, a giant hole in the ceiling, and the key resting in a rocky structure that, when entered, caused the corners of the room to open, revealing imps. However, when Baker found the resulting area too difficult to maneuver in due to lack of room, he replaced it with the current outdoor section.

The secret exit door originally had two shotgun guys near it. However, after playtester Brian Nesser (Anima Zero) managed to open it with one of the shotgun guys, they were removed.

If you activate the noclip cheat, jump into the lava pit around the red keycard, and look at the north, south, east, or west ends of the platform, you will find a message reading "TGH says: Quit using noclip!" If you use noclip to go all the way to either end of the cliff at the south of the map, you will find message that says, "You're not supposed to be here! -TGH" These are homages to professional level designer Richard Gray, who is well known for hiding Easter egg messages in his levels, often accessible only by cheating, most notably in his levels for Duke Nukem 3D.

Rocket Knight Adventures is a 1993 Sega Genesis game by Konami, featuring an opossum knight named Sparkster who wears a jetpack enabling flight. Baker is a fan of the Sparkster series, and included the title screen of the game as an Easter egg.

The coordinates that appear on one of the teleportation machine's monitors are the XYZ coordinates of the player 1 starting position in MAP31. The monitor also gives its location as "Berlin, Germany," which is a reference to the fact that MAP31 once contained SS Nazis.