MAP15: Computer Complex is the fifteenth map of 10 Sectors. It was designed by Paul Berlin and uses the music track " ". It has a way to the secret map. 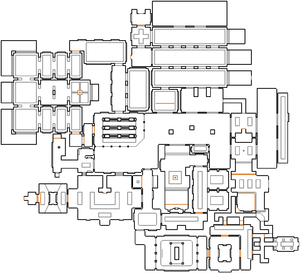 Map of Computer Complex
Letters in italics refer to marked spots on the map. Sector, thing, and linedef numbers in boldface are secrets which count toward the end-of-level tally.

Lots of former humans greet you at the start of this level. Take them out and head east to a hall. There is an armor if you turn left, and if you turn right, you will find another fork. For now, keep heading east. Follow this path all the way until you reach the yellow key, looking out for a wall of imps. Behind them is a super shotgun, which reveals chaingunners behind you. Return to the previous fork and head south this time, then east through the yellow door killing all the monsters you come across. Head through the thin corridors and go north to the next room. When you approach the blue key, it will close, and various monsters will be behind you. Press the switch to open the wall to the blue key and take it.

Backtrack all the way to the starting point. The blue switch in the room opens up the two northern doors to the sides. The one on the left leads to a rocket launcher, while the one on the right leads outside. Take out any enemies you see here, and head for the fenced-in computer section next. Follow either path inside through the brown rooms; you will have to fight a large amount of monsters in here. When you reach a fork, turn east and get the red key, revealing even more enemies.

Return to the starting point once more, using the opening that leads into the rocket launcher room if you have not seen it yet, and head west to the red door. The switch inside teleports you to the final area. Head for the western part of this area, where chaingunners guard a switch which releases several big monsters. Take them all out, then look in the lower right compartment for a switch that will lead to one of two exits. Flip the switch and head through the nearby door that opens and you will find the normal exit. If you decide to go for the secret exit, flip the switch but run back to the previous switch (the one that had chaingunners guarding it in the northwest section of the area) and through the open door there.

* The vertex count without the effect of node building is 1916.