MAP15: Dark Entries is the fifteenth level of Doom 64, designed by Randy Estrella. It is one of the smallest, but it contains some seriously brutal battles. It uses the music track "Wait For It". 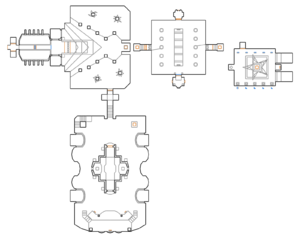 Map of Dark Entries
Letters in italics refer to marked spots on the map. Sector and Thing numbers in boldface are secrets which count toward the end-of-level tally.

The map begins inside of a small room, with faces on the walls staring at the player. Upon exiting this room, the player is greeted with a horde of nightmare imps and lost souls, and to make matters worse, homing fireballs pour out of launchers, which happens each time the player re-enters this room from the starting room.

To escape the barrage of homing fireballs, along the wall to the right behind the pillars is a niche marked by a yellow-lit symbol with a teleporter. This takes the player to a non-contiguous section of the map which has the blue skull key at one end, square stone columns along the adjacent wall, and a switch in between two dark alcoves where arachnotrons lurk who fire barrages of plasma shots at you. After killing the arachnotrons and activating the switch, the top half of the pillars will retract into the ceiling and a soulsphere will begin shuffling around. Afterward, the top half of the pillars will close and switches will appear on the opposite side of the room corresponding to each pillar. Activate the correct switch and the pillar will open up and reveal the aforementioned soulsphere, which upon collecting will lower the pedestal where the blue skull key rests. Select the wrong switch and an armor bonus will appear instead, which upon collecting will trigger the appearance of a horde of lost souls which you must destroy, and then you will have to try the puzzle again provided you survive. After collecting the blue skull key, some lost souls will appear from the large, star shaped opening in the stone ceiling. Defeat them and take the teleporter back to the starting room of the map.

Back in the main chamber, lost souls appear for you to kill. After that and dodging the homing fireballs again, look for a niche marked by a blue-lit symbol on the opposite wall of the first teleporter niche. The blue skull key will allow you to retract the pillars and you can advance to the next portion of the map.

The next section consists of a large stone approach with fencing on each side keeping imps and nightmare imps behind them, and arachnotrons perched inside caged and elevated alcoves firing away at you with steps in between leading to a back area currently blocked by stone pillars. After killing all monsters, behind one of the cages is a door that, when opened, drops you down into a short corridor with a pair of imps in cages, and leads you out into a courtyard surrounding a stone fort-like structure which is infested with arachnotrons, Hell knights, and barons. After persevering through the horde of the strong, powerful monsters, go to the far back wall of the yard, up either of the set of stairs and activate the switch. This switch will give you access to a teleporter which will take you back to the previous area of the map (the aforementioned approach), and drop the pillars blocking your way to the back area in the previous section.

Back in the approach up the steps, after you've dropped the pillars, a pathway to the small back area will be available to you to cross. However when you approach the pathway, a continuous stream of darts will fire off across the path, making it dangerous to cross. If you study the flow of darts, you'll be able to cross over while receiving little to no damage. In the back area are two doors. Each with health and energy ammunition, and one of them also has the red skull key, which is needed to open the door leading to the map exit. Upon collecting the red key, barons of Hell will appear at the previous end of the path and you will be forced to hunker down from their fireballs and pick them off from a distance. But after killing them, run back through the dart stream and make your way back into the teleporter to take you back to the starting room for the third and final time.

Your final visit to the starting room and main hall has you fighting one last company of arachnotrons, lost souls, and nightmare imps. Afterward, dodge the homing fireballs as before, then open the red door at the far end of the hall. Kill the baron lurking inside and activate the switch to end the map.

The fireball trap in the main hall can be turned off by simply running into the yellow-lit teleporter niche without going into the teleporter instead of waiting it out.

When doing the soul sphere puzzle in the area with the concealed arachnotrons and blue skull key, activate the switch corresponding to the column in which the sphere first appeared after it is done shuffling.

To get the soulsphere and blue armor powerups that sit on top of the pedestals inside of the fortress in the large open area after killing the hordes of arachnotrons, Hell knights, barons, and lost souls, go inside the fortress and run to the pane in the back facing the two ground level switches that sit outside. Use either your pistol or shotgun to shoot the switch on the left first, then the right one (the switch on the top center is for lowering the teleporter which will bring you out of the area). The pedestals will drop for a few moments giving you time to run up and collect the powerups before they return to their normal position.

* The vertex count without the effect of node building is 1364.