MAP15: Dead Zone is the fifteenth map of TNT: Evilution. It was designed by William Whitaker and uses a music track shared with MAP02: Human BBQ. 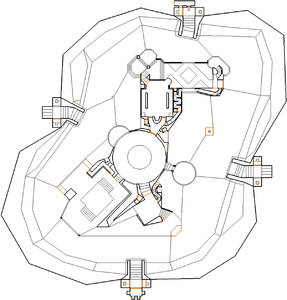 Map of Dead Zone
Letters in italics refer to marked spots on the map. Sector numbers in boldface are secrets which count toward the end-of-level tally.

There are no keys in the level. The exit is located at the top north of the map but first it has to be unlocked. The map itself is non-linear offering most of the areas as unrequired. The switch that unlocks the exit is in the central rounded room of the building.

In the starting room, collect items and push the wall to the right. Climb to the outside. In order to get to the central room, you have two variants:

1) Turn right and use the lift. Collecting a super shotgun climb the stairs. The central room is ahead of you.

2) Turn left and go around the corner. Use another lift here. You will come into a room with a water pool. There, turn left and enter the central room.

Push the green button next to a door in this room. The exit is unlocked now. Leave the building by dropping from any of the balconies. At the bottom, go around the building to the north until you meet a beige brick structure with a smashed corpse hanging on it (you could notice the same structure in the beginning). Fight the spectres guarding the door. Then open the door and kill an imp guarding the switch. Push the switch to finish the level.

In the starting room, push the wall to the right. Climb to the outside. Turn right and use the lift. Climb the stairs and turn left. Go through a small opening. Follow the corridor until you encounter a plasma gun. Turn right and push a misaligned wall in order to open it. Collect a berserk powerup (secret #6) and right here, push a wall to the right. Enter the teleporter. You will be brought to a small closet facing the outside. Not dropping from here, turn around and press the switch for the secret level, Pharaoh.

A sunken sector (330) near the eastern edge contains monsters waiting in ambush (four sergeants on ITYTD/HNTR, a cacodemon on HMP, a cacodemon and a pain elemental on UV/NM). However, because the sector is not tagged to a linedef action to raise the floor, it is normally impossible to get 100% kills on all skill levels. It is possible to kill or awaken the monsters by shooting a rocket at an enemy above the sunken sector, as the infinite height of the explosion will inflict damage on the monsters below.[1] This is not presently required for 100% completion under Compet-N rules.

* The vertex count without the effect of node building is 1058.