MAP15: Decomposition is the fifteenth level of Community Chest 4. It was designed by Lord Z and uses a MIDI rendition of Metallica's "Creeping Death" sequenced by King Diamond (no relation to the musician). This map contains a secret exit leading to MAP31: Mortar Combat. 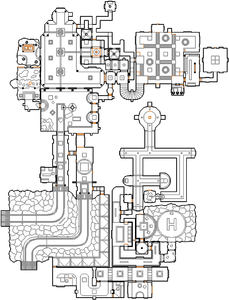 Map of Decomposition
Letters in italics refer to marked spots on the map. Sector, thing, and linedef numbers in boldface are secrets which count toward the end-of-level tally.

You begin at one end of a tan hall. Grab the shotgun and box of shotgun shells. There are three zombiemen and two shotgun guys behind the pillars here, so wake them up and clear them out. As you follow the hall east, you will encounter two chaingunners waiting in ambush (and an arachnotron on Ultra-Violence and above). Open the brown door at the end of the hall and you will be attacked by two demons and two spectres (not on Hey, not too rough and below). Further up at the T-junction, you will be attacked by an imp and a revenant (demon on Hey, not too rough and below).

At the junction, go right (up the stairs) to find yourself on a ledge in the corner of a slime-filled room with some pillars and ledges. This is a puzzle-like area. Your first order of business is to clear out the monsters on the surrounding ledges - a Hell knight in the southeast, up to three imps in the northwest, three zombiemen on the pillars and two demons on an isolated ledge in the north. Furthermore, there are two spectres (four on Ultra-Violence and above) in the slime, and they can use the teleporters intended for you to get back up to get onto your ledge. Get to work, and while you're on it, blow up all barrels on the ledges you see - you'll be visiting most of these ledges later while under fire from hitscanners. The sequence of events, ending with the collection of the yellow key, is:

Backtrack to the brown door that you used to enter this area. Just next to it is an alcove with a cylindrical metal structure, with an inverted pentagram on the wall next to it. Head into this alcove and flip the switch on the left to lower the structure, revealing it to be a platform. Ride this platform up and open the door at the top. This takes you to a corridor leading to a series of small "control rooms". As you enter the first one, watch for up to two imps and two shotgun guys. Open the door to the south, and watch for a spectre in the connecting corridor. Open a second door to the south and clear out an imp, zombieman and a chaingunner (not on hey, not too rough and below) in the second control room. Open the final door to the south, and in this L-shaped corridor you will find two Hell knights. Use your super shotgun to kill them before you get boxed in.

At the end of this L-shaped corridor, equip your chaingun and open the door. Mow down the group of up to two zombiemen, two shotgun guys and two chaingunners lying in wait. Use the switch to the right of the raised silver circular platform ahead to lower it, and prepare to do battle with an arachnotron. Ride the platform up and prepare to do battle with a second arachnotron (Ultra-Violence and above only). At this point, you have probably woken up all of the monsters in the outdoor area ahead, but you shouldn't waste time dealing with them. Instead, try to get the pain elemental in this outdoor area out of the picture first (as well as any cacodemons that wander in). The green force field ahead blocks movement, but not projectiles, so use it to your advantage.

Instead of going to the outdoor area, look left of the force field to find a silver door. Open it, equip your chaingun and climb up to the top (watch for any imps that may have opened the door at the top). At the top, open the second silver door to reach the highest L-shaped ledge in the outdoor area. It is full of imps (and one Hell knight at the end). You only have to deal with these monsters and any floating ones from earlier, so this should ease the load on your ammo.

At the end of the ledge, head through the door into an office-like area. In here, there are two zombiemen, a shotgun guy, up to two chaingunners and up two demons to deal with. Head around the desk and flip the switch to open the door in the northeast. Follow the red floor around to a door and head through to a brown hallway with metal structs. Here, you have to deal with three imps and a baron of Hell (two on Ultra-Violence and above). Head to the middle section of the hallway and open the left (north) door.

As you enter, you will be attacked by Hell knights from both sides (right side only on Hey, not too rough and below). Pull them out and deal with them. After you are done, go left at the junction. Head along the corridor and clear out four imps and four zombiemen at a grey "lounge" area. Head to the partially lowered door and look right (east) to find a silver door between "poison" signs". Open the door and drop down to a brick sewer area.

In this sewer area, the slime is damaging, so stick to the dry sides. Your job is to make a big loop clockwise to unlock the chamber with the blue key in the north. In order, these are the threats you will face:

Backtrack to the partially lowered door, and all the way back to the junction where you were ambushed by Hell knights. On your way back, watch for up to four chaingunners that have teleported into the sewer area. This time, go right at the junction (north). Turn the corner and deal with a mancubus (four imps on Hey, not too rough and below). Head into the door next to where the mancubus was, flip the switch to lower a platform, then puncture the cacodemon inside. Ride the platform up to a door leading to a D-shaped control room overlooking a helipad. Kill the zombieman, three shotgun guys and chaingunner in here, then flip the switch in the north of the room.

Backtrack to where the mancubus was. The door marked "exit" will now be open. head through it. Your final opposition is up to four spectres and two arachnotrons. Flip the switch at the end of the helipad to end the level.

* The vertex count without the effect of node building is 6652.