MAP15: Drainage Plant is the fifteenth map of Simplicity. It was designed by Melissa McGee (Agent Spork) and uses the music track "Oww!", originally created by Lee Jackson for Rise of the Triad. The par time defined in MAPINFO is 4:30. 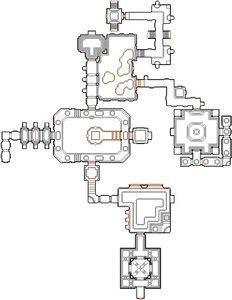 Map of Drainage Plant
Letters in italics refer to marked spots on the map. Sector, thing, and linedef numbers in boldface are secrets which count toward the end-of-level tally.

Kill the imps ahead then go round the corner to find a shotgun in some sludge - taking it will open six alcoves containing lost souls. Shoot the skull switch in the north-east corner to open the nearby door, which leads to a circular walkway with imps and cacodemons; the exit teleporter is in the middle of the room, blocked by three sets of colored bars that require the three keys to open. Press the lion switch on the east wall to open the north door, kill three demons waiting behind it then pass through the doorway between the east windows to get outside to a damaging sludge pool with two more cacodemons. Flip the switch on the east wall to lower some silver bars to your left, step past them to a dark tunnel guarded by imps, spectres and chaingunners. Run through the tunnel, collecting a radiation shielding suit and chaingun on the way, to reach a small door and open it to find two chaingunners protecting a switch.

Flip the switch then head back to the hallway west of the sludge pool, where a door to the north has opened allowing you to get the blue skull key; taking the key will cause a pack of imps, shotgun guys and demons to appear in the hallway behind you. Fight your way back to the sludge pool and press any of the blue bars in the south-east corner to open them, kill some waiting spectres then take the radiation suit on your left before following the tunnel to another set of bars. Lower them to enter a courtyard with imps and cacodemons, then go through the opening in the east wall and use the super shotgun on your left to kill a couple of Hell knights before following the passage south and west to another switch. Kill a revenant that appears in front of you before flipping the switch, which will lower a pillar in the middle of the courtyard holding the yellow skull key.

Take the yellow key then enter the teleporter in the west wall and press the lion switch in front of you to find yourself back in the exit area. Open the south door (locked with the yellow key) and kill a few demons waiting behind it, then go down the stairs to a room with some imps, cacodemons and knights. Go up the steps by the east wall and flip it to open a door below, which has two revenants waiting behind it, then go through and follow the hallway past some demons and imps to a switch that will lower a wall behind you, revealing two arch-viles and two revenants guarding the red skull key. With the red key, go back to the exit room and press all three sets of colored bars to reach the exit teleporter.

* The vertex count without the effect of node building is 3252.