MAP15: Fortress: Administration is a level in Strife. It uses the music track "Action".

Arriving here from the security complex, the Strifeguy must locate and destroy the computer which controls the forcefield blocking the entrance to the Bishop's tower. 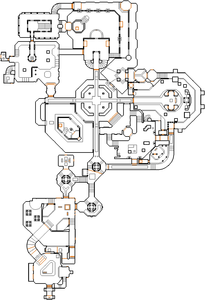 Map of Fortress: Administration
Letters in italics refer to marked spots on the map. Sector, thing, and linedef numbers in boldface are secrets.

Step out of the teleporter and head down the staircase on your left. The acolytes and templars in this level will not be hostile until you provoke them, so avoid combat for as long as possible. Go up the steps in the next room and the metal gate in front of you will open automatically - keep heading up the stairs through an orange doorway (which will raise the alarm if you are not carrying an officer uniform), then turn right and follow the corridor up another set of steps to a silver door. Go through it and step on the hazard markings ahead to lower a lift, which will take you to a room with two red acolytes. Walk past them and press the button which rises in front of you.

Go back down the lift to the previous room and head through the now-open door to the north. Go forward around the pillar into a room with a gold-shirted peasant and pull the switch that descends from the ceiling. Leave the room and head east down the steps, then go forward through an open doorway; bars will lower behind you to seal your way back. Follow the corridor until it curves to the left, then turn left and jump across the trench to press the button next to the peasant (if you fall in the trench, there is a teleporter at the bottom which will put you back on track). Jump back across the trench and continue following the passage to a silver door which will not open. Turn left and step on a lift which takes you down to a lower room with crates.

Once through the doorway, turn right and follow the passage ahead to yet another lift, which will take you down to an area guarded by a reaver; destroying it will alert nearby enemies to your presence, so be ready to fight from here on. Head south from the bottom of the lift and turn right to go down some steps, then head forward round the windowed balcony and through a silver door. Head down the corridor to a room with a water pool - turn left and follow the walkway round to the end, then turn left to climb the steps and find the core key sitting on a plinth. With this key, head back along the walkway to see a large gate on your right; open it and the door behind, then turn left and destroy the crusader ahead. Go forward to an octagonal room with four numbered passages, and head east down the passage numbered 2. Open the door at the end and head through to a room with various screens. Press the button here to raise the surrounding walls and expose the computer; destroy it with any weapon.

Head back to the octagonal room and take the passage numbered 1 to a small round room. Head south up a staircase and turn right at the top to go through the door ahead, leading to a familiar room (the enemies here will have been alerted so be ready to fight them). Go back through the orange doorway and down the steps to the starting area. Go through the silver door in the south wall to return to the bailey. (In the Veteran Edition, you will first need to throw the switch next to the door to lower the forcefield blocking it.)

Destroying the computer will open a set of bars at the south end of the passage numbered 1. The alcove behind these bars holds two shadow acolytes guarding a surgery kit, high-explosive grenades and a box of bullets.

If you leave this level before destroying the computer and then jump out of the guard towers into the bailey, you will be unable to continue the game. It will not be possible to return to Administration directly, and attempting to go back via the security complex will result in you encountering an impassable barrier. The Veteran Edition corrects this issue by blocking the exit from Administration with a forcefield, and putting the switch to disable it behind bars that only lower when the computer is destroyed.

* The vertex count without the effect of node building is 3056.