MAP15: Frozen Maiden is the fifteenth map of 32in24-5, a deathmatch megawad. It was designed by Andrew Apted (andrewj) and Sarah Mancuso (esselfortium), and uses the music track "Void," originally composed by Kevin Schilder for Hexen.

Frozen Maiden later appeared in MAP01 of 32in24-14, as part of a rule for that session allowing the reuse of architecture from previous 32in24 maps. 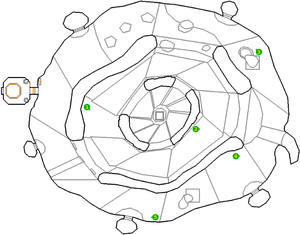 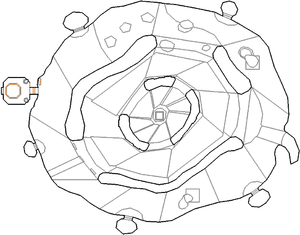 Frozen Maiden is a small-to-moderately sized map carrying a snow and ice theme. The map's layout is circular, and can be divided into three layers. The outer layer is cavernous and is essentially a staircase that begins in the north-east, where players can find a shotgun, and gradually ascends, travelling clockwise around the map. The super shotgun can be found at the western side, as can the exit room, which branches off just to the north. At the north of the map, the outer rim reaches its highest point, where players can find the rocket launcher. This is followed by a steep drop back to the bottom.

The inner layer is accessed only from the highest point of the middle layer in the north-east, and is essentially just a small cave with a clockwise staircase leading up to the plasma gun at the centre. In addition to the entrance, players can exit the inner layer by dropping out of the openings to the north-west and south.