MAP15: Halfway Between is the fifteenth map of NDCP2. It is referred to as Down the Drain on the intermission screen. It was designed collaboratively by Osiris Kalev, Josh Sealy and CrazedImp. It uses the music track "Cross-Examination - Allegro 2001" from "Phoenix Wright: Ace Attorney". It contains a secret exit leading to MAP31: Die Like You Mean It. 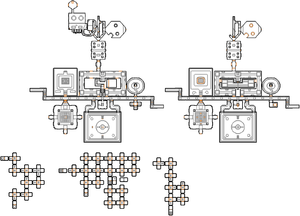 Map of Halfway Between
Letters in italics refer to marked spots on the map. Sector, thing, and linedef numbers in boldface are secrets which count toward the end-of-level tally.

Due to Secrets #8 and #9 being too small to register, the maximum amount of secrets for this level is 77%

* The vertex count without the effect of node building is 9150.