MAP15: Helix is the fifteenth level of Plutonia: Revisited Community Project. It was designed by Xaser Acheron, who also composed the level's music track, entitled "Dread", originally for another project. The par time defined in MAPINFO is 3:30. 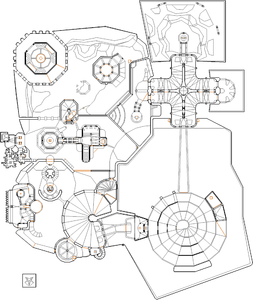 Map of Helix
Letters in italics refer to marked spots on the map. Sector, thing, and linedef numbers in boldface are secrets which count toward the end-of-level tally.

In vanilla Doom, the save game buffer overflow can occur. The visplane overflow can also be triggered, but only if using the idclip cheat code, or any other method of turning clipping off.

* The vertex count without the effect of node building is 4473.

The level was inspired by Neurosphere, the eighteenth level of The Plutonia Experiment. It was built in four months, using Doom Builder 2 and SLumpEd.