MAP15: Human Barbeque is the fifteenth map of PlayStation Final Doom and is the second map of TNT episode. It is based on MAP02: Human BBQ of TNT: Evilution as a slightly renamed map conversion. Changes for the PlayStation port were authored by Tim Heydelaar.[1] It uses the music track "Digitized Pain". 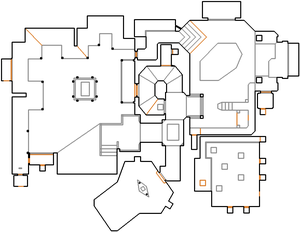 Map of Human Barbeque
Letters in italics refer to marked spots on the map. Sector, thing, and linedef numbers in boldface are secrets which count toward the end-of-level tally.

Go north-east past the human barbeque and press use on the metal barrier to lower it. In the next hallway, head north and climb the staircase to find the red keycard. An alcove will open nearby which contains two demons on Hurt Me Plenty (HMP) skill level, or three on Ultra Violence (UV).

Return to the water pool you passed earlier and go west to an outdoor area. Head down the staircase and locate a door in the north-east corner of this area which is locked with the red key, and go through it - you will pass through a corridor to a large hall. Go south until you pass a stone staircase, then look north to see a switch which you need to press. As you approach the switch, two small rooms will open nearby releasing a number of demons.

Return to the hallway with the square water pool. East of where you found the red keycard you will see a ledge with three windows looking out at the large hall - run through the east window to land on the stone staircase you passed earlier, then follow the walkway south and west to collect the yellow keycard. Watch out for a monster trying to ambush you from your left as you take the key - a zombieman on I am a Wimp/Not Too Rough (IAAW/NTR), or an imp on HMP/UV.

Go back to where you found the red keycard. There is a door here locked with the yellow key which you can now pass through. Step through to a ledge overlooking the large outdoor area, then run north so you land on a walkway. Follow the walkway around the area until you reach the exit door, then head through it and press the switch to finish the level.

After jumping through the window to the stone staircase, follow the walkway north and jump down the ledges to find the blue keycard. This key is required to reach secret #2 (see below).