MAP15: Industrial Zone is the fifteenth map of Doom 2 In Name Only. It was designed by Matt Powell (cannonball) and uses the music track "". The par time defined in MAPINFO is 8:00. 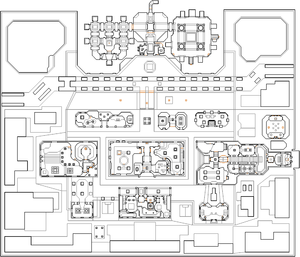 Map of Industrial Zone
Letters in italics refer to marked spots on the map. Sector, thing, and linedef numbers in boldface are secrets which count toward the end-of-level tally.

Next to the barricade leading north of the main streets of the map is a large metal pillar with torches, a soul sphere, and a teleporter. The nearest building to this pillar has an arch-vile on it. If you let the arch-vile live and perform a well-timed arch-vile jump, you can reach the pillar. The teleporter here takes you behind the barricade, which can save some time.

* The vertex count without the effect of node building is 5442.