MAP15: Industrial Zone is the fifteenth map of Doom II. It was designed by John Romero and uses the music track "Running From Evil". The par time is 3:30. This map also has a secret exit switch that grants access to MAP31: Wolfenstein, the first of the two secret maps of Doom II. 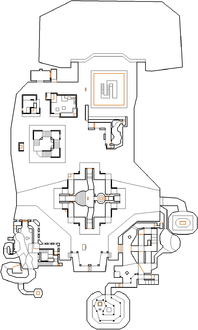 Map of Industrial Zone
Letters in italics refer to marked spots on the map. Sector, thing, and linedef numbers in boldface are secrets which count toward the end-of-level tally.

At the start of the level, go through the green door to the left and ride the elevator down by flipping the switch inside. Once you reach the bottom, step outside. From here, turn left and flip the switch directly in front of you. This causes the large stone rectangle to lower, revealing a walkway up to a megaarmor - it is a good idea to pick it up, due to the amount of hitscan monsters in this level. From here, follow the alley between the two buildings to the south, then turn southwest towards the tall dark brown iron building. At the far corner of this building is the start of a spiraling staircase leading to the top. Climb it and get the rocket launcher between the two green torches. Just west of this building is a small raised platform with a white teleport pad on it. Face it and run towards it and you should land on the platform and go through the teleporter.

You will be taken to a high ledge on the side of a nearby building. Run forward along this ledge but let go of the run key just before you reach the end. You should land on another ledge a bit further below on a third building; it is tricky to get from the first to the second ledge, as full-speed running will cause you to overshoot the second ledge, so it may require several tries to perfect. Flip the lion-faced switch in front of you, then drop inside the building. Take the teleporter on the floor, and upon reaching the other side, turn around and re-enter the teleporter you just emerged from. You will arrive on top of some crates in the previous building, with a red keycard easily in reach. Drop down between the crates to get a berserk pack, then exit this building through either the teleporter or the elevator in the opposite corner.

Once you are back outside, ride the lift up to the red door; in the grey and brown brick building at the east end of the "town". Follow the walkway to another teleporter and go through. You will arrive in the large building in the center of the lava pit. From here, go right and flip the skull switch to lower the lift next to it. Ride up and continue along the path, turning left at the nearby entrance into the building. Drop in and pick up the BFG9000. This triggers an enemy ambush, so be prepared. After dealing with the monsters, enter the green alcove directly in front of where you picked up the BFG. The wall inside will open, revealing the yellow keycard. After you get it, flip the skull switch on the pillar and proceed up the newly raised stairs.

Once back on the high walkway circling this building, follow it to the south side of the building. From here you will be able to drop down to the ground on the far side of the lava pit - drop down to the far ground and go through the yellow door in the southwest building. Inside is a small lava river with three exits. First, grab the radiation shielding suit in the north-leading exit, then head to the end of the south-leading tunnel and flip the switch. Return to the main room, where some stairs have risen. Follow them all the way to the top and flip the gargoyle-faced switch at the end to lower a lift leading up to the parapets at the top of this building. Follow the parapet east to another gargoyle-faced switch. Flip it, then return to the main room of this building again. There will be a lighted arrow on the floor and ceiling of the room pointing to one of the walls. Open the wall it designates to reveal the blue keycard.

From here, you may choose to exit to the secret level (see secret #11 below for instructions on how to access the secret exit), or continue to the level's regular exit:

Return outside and follow the grassy ledge southeast to an iron "bridge" leading across the lava. Open the yellow bars midway through and enter the yellow door of the building at the far side. Once inside, walk straight ahead and the wall in front of you will lower. Follow the staircase up to another apparent "dead end"; once again, simply approach the wall and it will open like a door. Repeat this technique with the next wall, climb some more steps, and through one last wall at the top. Go through the blue key door and follow the barred path to the exit teleporter, dodging imps' fireballs along the way.

It is normally impossible to register secret #4, as the secret sector in question (sector 147) is located adjacent to the raised teleport pad and is only 16 units wide. This setup completely prevents the player from touching this sector's floor (as is required to trigger a secret), because upon crossing the sector's boundary they are immediately raised onto the pad and teleport away. Therefore, the maximum secret percentage one can ordinarily get on this map is 90%.

It has been shown possible to achieve secret #4 via obscure game mechanics, by luring a pain elemental to the location and allowing the door to try to close onto the player's head as the pain elemental attempts to spawn a lost soul. While the mechanism is not currently completely understood (it may be related to the phenomenon of sprites flickering across ledges or lifts), the resulting series of clipping operations will temporarily lower the player's z coordinate to the lowest floor underneath the player, causing the secret to be tallied.[1] This is not presently required for 100% completion under Compet-N rules.

When saved games are allowed (which is not the case for any category of demo recordings), it is also possible to obtain this secret by saving the game and reloading while standing on the teleport pad with the player's midpoint in the secret sector. This is due to the bug by which players may become stuck in ledges when loading saved games.