MAP15: Internal Reaches is the fifteenth map of Community Chest. It was designed by Samuel "Kaiser" Villarreal. 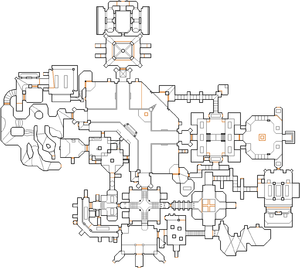 Map of Internal Reaches
Letters in italics refer to marked spots on the map. Sector, thing, and linedef numbers in boldface are secrets which count toward the end-of-level tally.

Go across the bridge, open the door, and run to the switch in the east. Flip it, and run up the southern stairway. Open the door, head over the bridge, and flip the switch on the other side. Return to where you came from, and head up the stairs to the north. Flip the switch to lower the pillar. Grab the red key sitting on it, and leave through the next two doors to the west. Head through the red door at the north, and go under the skylight to open closets to the east and west. Hit the switch in the northwest compartment, go through the doorway, and go into either one of the northern corners in the next room. Hit the switch.

* The vertex count without the effect of node building is 2605.