MAP15: Jungle Hijinx is the fifteenth map of Rowdy Rudy II. It was designed by Aurelius and uses the music track "Upper Brinstar (The Jungle Floor)" from Super Metroid.

There is no secret exit to MAP31 on this map (as this PWAD does not modify the vanilla MAP31, there is no need for one). 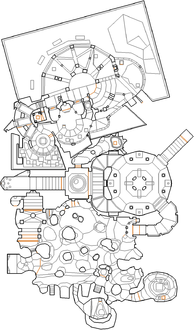 Map of Jungle Hijinx
Letters in italics refer to marked spots on the map. Sector, thing, and linedef numbers in boldface are secrets which count toward the end-of-level tally.

* The vertex count without the effect of node building is 3466.