MAP15: Karmacoma is the fifteenth level of Memento Mori. It was designed by Florian Helmberger and uses the music track "Triangle of Fear" by Mark Klem.

The level is named after a song by the British trip hop band Massive Attack from their 1994 album Protection. 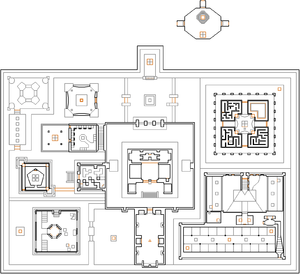 Map of Karmacoma
Letters in italics refer to marked spots on the map. Sector, thing, and linedef numbers in boldface are secrets which count toward the end-of-level tally.

Kill the enemies at the beginning and get some supplies before heading through the next door. Open it and head straight across into the next building. Head around the gray walls and flip the switch on the backside. Look out for the many monsters when trying to exit, then leave the building and head around it to the open doors. In the courtyard with the fountain, there are bars to the north that lead to the normal exit, as well as two doors. Take the one on the right, then go to the building that does not have a moat surrounding it, taking the entrance on the northern side. Drop into the nukage and head to the eastern side. There are four switches here. Press the leftmost one to raise a bridge from where you dropped off. The one next to it actually releases some monsters. The next switch opens a door at the end of the bridge and the rightmost switch lowers the bridge as a lift. Ride it up, and take either teleporter (the switch right next to the teleporters is another switch that lowers the bridge as a lift). In the caged area, kill the spectres, barons of Hell, and cacodemons as you make your way to the central teleporter. Take it to get the blue keycard, then exit the building and return to the courtyard with the fountain.

Now take the door on the left and open the blue door straight ahead. Kill the enemies inside, and flip a switch on the block to lower a nearby pillar, ride it up, then jump towards the block which is a teleporter to teleport onto the building with the moat around it (on the right side of the map). Enter it to find a central pentagram teleporter that you need to access. There are four side lifts each with a box of shells on each one. The northwest one is the one you need to go to. Navigate the maze until you find a switch, and then return to the main room to find a block has been raised so you can access the pentagram teleporter. You will teleport onto another pentagram; open the door to the northeast to find a room with the yellow keycard. Take the teleporter you came out of the teleport to the northwest corner of the map, ambushed by chaingunners unless you found Secret #6. Leave via the door to the south, cross the blocks over lava, and head for the building with the staircase. Open the door to enter a storage room. There is a switch in the southeast corner of the room that you need to flip, so navigate to it, then leave the building to find a bridge branching to the building to the west. Cross it and head around to find a yellow door leading inside. Head through the corridor killing chaingunners, demons, and spectres until you reach the top room with a baron of Hell and Hell knights. Hit the switch here, leave the building, and head for the building to the south which is now open. Climb the steps up and follow the ledge to a room with four switches. Flip the two furthest switches to open some gates to the east. Through these gates are a ton of monsters, but also the red keycard. Fight them off, being sure to pick up the red key. Then head back to the courtyard with the fountain and open the bars. Enter the teleporter and hit each switch behind each key barrier to take the normal exit.

When doing speedruns of this level, the most optimal elevator to lower in the northwest elevator and teleporter building is the southwest one, activated by the teleporter platform's western switch. From the southwest of the building, you can strafejump into the western portion of the yellow keycard building, circumventing the need to enter the northeast building.

The secret exit on this level can also be accessed by strafejumping to the platform from either window of the warehouse, without needing to activate the walkway first.

* The vertex count without the effect of node building is 2405.